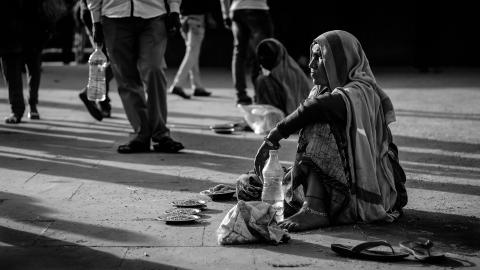 Chad Ribordy, returned Lay Missioner, reflects on God's invitation to examine the effects of our choices.

I once heard a story of a U.S. citizen who was visiting India for the first time. Shortly after arriving in Calcutta, he hired a tour guide to lead him through the seemingly chaotic city. They happened upon a beggar on the street. The tour guide, also apparently a person of little means, gave the beggar 10 rupees, and moved on. Puzzled, the person from the U.S. asked the tour guide why he gave the beggar the 10 rupees. “Because you never know when you will need the 50 that will come back.”

It is a story of a piece of wisdom which virtually every world religion teaches: the belief that there is cause and effect operating in God’s grand universe. We see this clearly in today’s first reading as well as in the Gospel.

Cause and effect is a great principle when it works in our favor: the Indian tour guide gets his 50 rupees, the humble person becomes loved, the rich person gets her/his place in heaven. Not such a great principle when it works against us. In Luke’s Gospel, the example given are those who put themselves at the place of honor at the wedding banquet, and then have to face the embarrassment of moving to the lowest place.

When the principle is working against us, we tend to want to turn a blind eye toward it, and shift the blame of the negative consequence to someone else or to the situation. “How was I to know the Queen of England was going to be at that wedding?” Or, “She’s not all that special anyway.”

Examples of this in daily life abound, but one area which desperately needs more attention is the cause and effect principle operating in our actions toward the planet. As I am typing this reflection from my little corner of the planet in Brazil, a bulldozer has cranked up, and is currently clearing one more plot of land in our rural neighborhood situated in the Atlantic rainforest. Of course, the immediate effect will be felt by the neighborhood in a few short hours. The bulldozer is clearing land on a surface which slopes down unto the dirt road which allows access to the neighborhood … and it is the rainy season here. The rains will begin to start up again this afternoon, causing mud from the site to flow into the streets. It is the equivalent of a 12 inch snow storm. The street will become impassible.

But the rainy season will pass, the mud will dry, and all will be well again. After all, they knocked down only a few trees. Couldn’t possibly make a difference, could it? I shudder whenever I hear the bulldozer come into our neighborhood. And it comes with more frequency as the population expands from the city, each one wanting a little more “paradise” away from the hustle and bustle, but turning rural into urban as they come.

The bulldozer are loud and definitive, their destruction obvious. But there are other bulldozers in life, ones much more subtle but collectively just as destructive. And they operate much closer to home.

* Cause: I clean my floors with industrial chemicals, and dump the dirty bucket water into the drain.
* Effect: Groundwater is no longer potable
* Cause: I bring home fruit from halfway around the world.
* Effect: Global warming.

Oversimplified? Perhaps, but the point is that there is cause and effect in all of our actions, as simple or as complex as they may be. The sad thing is that it is not always I who first feels the effects of my actions. So my groundwater is now contaminated. What do I do? I get in my car, and go to the store and buy spring water (which by the way is probably also contaminated as water is an unregulated industry in Brazil, as it is in many parts of the world). But what about my neighbors Jose and Fatima who do not have a car, nor the money to buy water? They will drink from the poisoned well, get sick and stay sick because there is not adequate health care for those with low income.

This all may seem like bad news, but it need not be. In the letter to the Hebrews we read, “You have not come to something that can be touched, a blazing fire, and darkness, and gloom, and a tempest … But you have come to Mount Zion and to the city of the living God.” Hope abounds. We can overcome the blazing fires and storms in our personal and collective lives. We need not be on the path of destruction. We are called to take up the gospel mandate to examine our lives in a reflective way, being more conscious of the cause and effects of our actions.
In doing so, we will be able to join the Psalmist when he sings, “[Let] the righteous be joyful; let them exult before God; let them be jubilant with joy.”

Photo by Aamir Mohd Khan, available in the public domain.