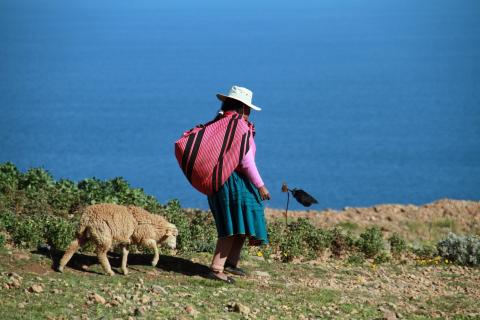 Christine Perrier, a former Maryknoll Lay Missioner who continues to live and work in Peru, discusses the importance of letting go of our idols and embracing the God of love.

In Puno, Peru, Marisol, a mother of two young boys, provided refuge in her humble home to another mother with three children who had nowhere to go. The woman's husband repeatedly lands in jail, and abuses her when he’s “free.” Marisol and her husband reflected the unconditional compassion and mercy for this vulnerable and broken woman and her children that our God of Love has for us.

In Peru, many idols have been created that have much power and control over the people on the margins. Neo-liberal policies of the central government place more value in foreign investment of extraction industries than in the livelihood of the people or care of creation. Land is sold for exploitation or "development" without consulting the indigenous peoples who live there, nor with any concern for environmental protection. Only long after the deals have been made in government offices do the people find out about them. Four lots have been approved and sold for gas exploration within Lake Titicaca; abput 40 percent of Peruvian land is granted as concessions to mining companies, the majority in indigenous regions with extremely high levels of poverty; and a contract with Brazil opened the doors for the construction of a massive hydroelectric dam that will exterminate 40 communities and damage the biodiversity in the region.

Picture by Monica Volpin, available in the public domain.