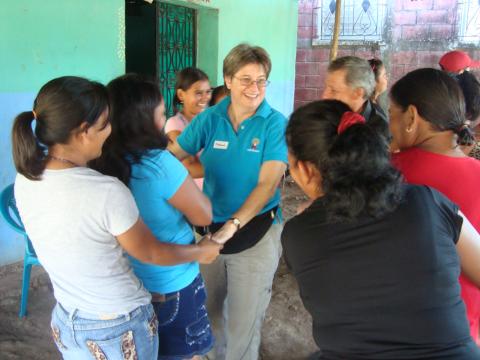 Debbie Northern, a Maryknoll lay missioner in El Paso, Texas, reflects on the value of childlike trust in God.

When I first joined Maryknoll Lay Missioners in 1999, I had a vague idea that I would be helping the poor and disadvantaged. Now, I realize that this attitude could lead me to feel superior and thus view the people with whom I would be living and working as inferior. I soon discovered that even though I had gifts and talents to share, I also had a lot to learn from the people. I did not have the capacity in another culture to be a leader: I could not speak the language and did not understand the history or norms of the country.

Initially, I was like a child, needing help to do the basics, like learning the language and how to get my needs met. I had to become humble and ask for help. I was grateful for all the people who patiently guided and taught me. This vulnerability made me seem more accessible and human to people so we could get to know each other and work in mutuality. I found out I did not have to know everything and was open to learning new ways.

In today’s Gospel, Jesus taught the disciples about being servant leaders. Living our faith as Christians is not about hierarchy or power, but service to our brothers and sisters. Our example is Jesus, who showed compassion and understanding to the marginalized populations of his day and who washed the feet of his disciples.

In El Salvador I worked with CONTRASIDA, an organization that provided education on the prevention of HIV/AIDs and served people affected by these diseases. Initially, I assisted at the weekly clinic with activities for the many children who would often be there for hours. I began to do tutoring as many of the children were behind academically. In helping them with their schoolwork, they in turn helped me with my Spanish. The children were willing teachers, overlooking my terrible accent and not judging my lack of grammar. It was a reminder to me to be less judgmental of others, especially those who are struggling with a new language and culture, like the migrants coming to the United States.

Trust is another gift of being childlike. When Jesus said, “whoever receives one child such as this in my name, receives me; and whoever receives me, receives not me but the One who sent me” he may have been asking us to trust and rely on him. In my nearly 23 years of mission, I have seen tremendous faith in the people with whom I have worked. In the midst of poverty, oppression, and injustice, they are able to put their trust in God and persevere. As they say in El Salvador, “Dios primero” (God first). As someone who comes from the United States, I often think I can do things on my own and forget to trust in God.

One day I was with a group of people from CONTRASIDA out in the countryside visiting one of the families we supported. To reach the house, we had to climb a steep hill and then cross on a narrow wooden board over a ravine that was about a five- or six-foot drop. I was nervous about crossing over for fear of falling. One of the children saw my hesitantly and came back to take me by the hand and lead me over. I think this is the type of leadership that Jesus calls us to – seeing those who are afraid, lonely, hurt and disillusioned, and taking them by the hand bring them to safety and hope.