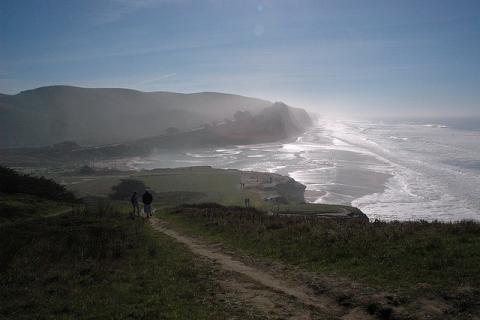 Maryknoll Sister Helen Graham, on mission in the Philippines for more than 50 years, reflects on the question "Where is God?" when disaster strikes.

“Where was God?” people asked in the wake of the cataclysmic Asian tsunami of December 2004. Why, the question goes, if God is so powerful and good, does God allow such terrible disasters to strike the lives of hundreds of thousands of innocent people? It is particularly at a time of calamity that such a question arises. In the Book of Job, however, God turns the question around. Speaking to Job from the whirlwind God asks, “Where were you?” (Job 38:4), in a line unfortunately omitted from today’s first reading.

In the words of London’s Chief Rabbi Jonathan Sachs, “The religious question is … not ‘Why did this happen?’ but ‘What then shall we do?’ … The only adequate religious response is to say ‘God, I do not know why this disaster has happened, but I do know what you want of us: to help the afflicted, comfort the bereaved, send healing to the injured and all those who have lost their livelihoods and homes.’”

The Philippines had one of its many catastrophic disasters in northern Luzon a month before the Asian tsunami. Floods and mudslides are a fact of life in the Philippines due, in large part because the area of forest cover has declined from about thirty million hectares (ha) one hundred years ago to about 70,000 ha today, which is adversely affecting the climate. In addition, a fundamental connection exists between the disproportionate number of poor people who suffer as a result of such natural events and the greed and insensitivity toward the common good that lead some to engage in rampant depletion of the forest cover.

Out of a population of about 120,000, over 10,000 houses were destroyed and more than 1,500 people lost their lives as a result of massive flooding sparked by days of heavy rains which loosened a barrage of mud and logs down the mountainside onto the barrio below. Women said that night seemed “like the end of the world.” The waters of the rivers overflowed with tremendous force, during what was termed a “tropical depression” carrying with them logs which had been stockpiled on the Sierra Madre. Within the space of a couple of hours it rose to the level of rooftops and then subsided, leaving depths of mud and debris on the shoreline. As far as the eye could see the Pacific was afloat with logs, both freshly cut and others obviously aged some years.

The question “Where was God?” which arises in such situations echoes that agonizing question of some 2,500 years ago when, in the wake of the Babylonian destruction of city and Temple, the psalmist cried out, “Where is your steadfast love of old?” (Psalm 89:49) Today’s responsorial psalm, Psalm 107, in some way tries to grapple with that desperate cry by highlighting one of four different groups who had experienced rescue from various disasters. "Some went down to the sea in ships … the stormy wind … lifted up the waves of the sea … their courage melted away in their calamity … Then they cried to the Lord in their trouble, and he brought them out from their distress." The psalm in its entirety depicts those who were hungry and thirsty, in prison, sick and afflicted, and lost at sea, but whom God delivered and who were, therefore, being invited to give thanks.

The Gospel of Mark portrays Jesus doing the works of God — the same as those depicted in the responsorial psalm: feeding the hungry, freeing those imprisoned by demons, healing the sick, and, particularly as in today’s Gospel reading (4:35-41), quieting the storm. Jesus does the works of God and invites us to imitate him in our response to such disasters, which along with immediate assistance in food, clothing and shelter, requires a commitment to work actively toward minimizing avoidable effects of disasters.

In response to this particular situation in northern Luzon, and in the face of the continuation of irresponsible logging practices, an ecumenical Task Force Sierra Madre was formed which has enabled the people to achieve some progress toward the implementation of already-existing laws geared to curtailing the activities of the loggers.

The question “Where was God?” becomes “where were/are you?”

Recognizing the vulnerability of certain populations to the impact of climate change makes us aware of how all too often resources are distributed and used mainly to serve wealthy interests. The Maryknoll Office for Global Concerns’ Faith-Economy-Ecology project is focused on helping people think through the kinds of policy changes that must take place so that our economic and social policies are shaped such that human activity fits within the limits of the world’s natural resources and regenerative capacity.