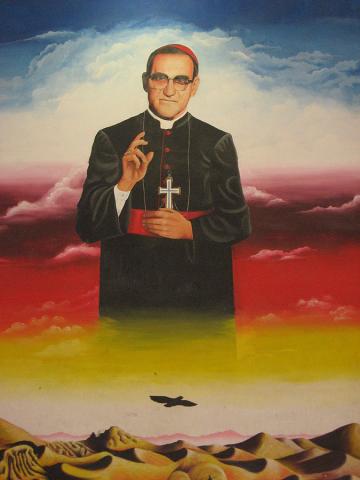 When I accepted an assignment as a Maryknoll Lay Missioner to El Salvador in 2003, I knew very little about Bishop Oscar Romero. However, in my eight years of mission in El Salvador, I grew to admire him greatly as a model of Christian living.

Bishop Romero was assassinated while saying Mass on March 24, 1980. During his brief time as Bishop of San Salvador, Bishop Romero spoke out against the violence of the civil war being waged in his country, especially against the systematic killing of the poor and defenseless.

In the first reading from Jeremiah, the prophet does not cease to speak God’s words, despite threats and denunciations from the people. Bishop Romero was criticized by Church and government officials who denounced him for talking about “politics” in his homilies. He spoke of the repression and slaughter of the people, and of the disappeared during his homilies, calling for peace and justice.  His was one of the few voices speaking openly of what was happening in El Salvador.

Many priests, religious and lay Church leaders were being killed by the government forces at that time. Bishop Romero knew that he, too, could lose his life for speaking the truth. He said, “Let my death, if is accepted by God, be for my people’s liberation and as a witness of hope in the future….”

Bishop Romero lived and died trusting in God. He believed Jesus’ words in today’s Gospel, “Do not be afraid of those who kill the body but cannot kill the soul.”

Each year while in El Salvador, I participated, along with thousands of other people, in a procession on the anniversary of Bishop Romero’s death. In 2015, Pope Francis beatified Bishop Romero; this was a confirmation for the many people in the Americas and beyond have considered Bishop Romero a saint and martyr for years.

The message of Bishop Romero is just as important today in El Salvador and the world as it was in 1980. Many parts of our world are in conflict and the poor and defenseless are those who suffer the most.  In El Salvador, violence continues due to gangs, poverty, lack of education and opportunities for jobs. We need more prophets like Bishop Romero who are not afraid to speak the truth and can face the anger and hatred of those do not wish to hear the voice of God, even if it may lead to their death.

Now that I have returned to the U.S. to work as a staff member for Maryknoll Lay Missioners, I realize that I need to continue to speak out for justice in El Salvador and other places in the world. I have seen first-hand the effects of poverty and violence. Recently I spoke at a campus ministry and one of the students wanted to know why so many people were fleeing Central America to come to the U.S. I explained that in El Salvador people do not have hope of getting employment to support their families, so they come north hoping to make money to send home.  Another reason is the fear of violence.

One of the women who worked with me in El Salvador broke down in tears because of her fears that her two teenaged children would be targeted by the gangs. She wanted to get them out of the country to the U.S. One of the youth in our theatre group was killed by a gang member. At a Memorial Mass at our offices, the boy’s father during the prayers of the faithful prayed for the gang member who had killed his son and forgave him.

I am not certain that I have the same courage of Bishop Romero to speak out about injustices, especially if I will be reviled or killed. Or to have the grace to forgive someone who has killed one of my family members or friends. I need to pray for the courage to take up my cross and follow Jesus and believe that “whoever finds their life will lose it, and whoever loses their life for my sake will find it.”