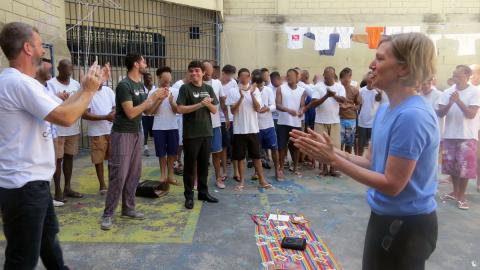 Maryknoll Lay Missioner Marilyn Kott in Brazil reflects on the lessons the Scriptures offer on experiencing and responding to anger.

In our modest classroom at the penitentiary in southern São Paulo city, the prisoners took turns talking about their clay sculptures. The men had created the figures to express a painful event in their lives, one in which they had been the victims of some form of violence.

The clay sculpture exercise happens during the fourth of ten sessions of the Restorative Justice Principles course that Sister Martina and I teach on Thursdays to a class of about 18 men. The idea is to help the men at the Paralheiros Penitentiary think about anger in a way that can help them turn away from responding with violence. We start with an incident in which they were a victim, and later we discuss a time when they may have been a perpetrator. By considering both viewpoints, we can increase their ability to interrupt and mediate a conflict, rather than responding in kind and continuing it.

It was Daniel’s turn, and he began to talk about his clay sculpture. It was a fierce looking whip, representing one that had been used on him when he was six years old, he said. The pain was still there as he described the incident, which in his memory had gone on forever. He described the betrayal and the helplessness he had felt. And the anger.

When we discuss anger in our classes, we never talk about it as an evil – but as a signal that something is wrong. This starting point allows us to discuss the different ways in which people experience and respond to anger. And it allows us to help the men become more aware of their own responses, so that they can learn strategies to respond without resorting to violence or to simply repressing their injury.

I wonder if the story of Jesus’ sharp words about the scribes in today’s Liturgy provides any comfort to Daniel and the other men, because it disturbs me. In criticizing the ways of the scribes, Jesus is not the gentle, smiling Messiah we usually read about, his hand stretched out in invitation or healing. He is shockingly angry, denouncing the scribes’ behavior and warning, “they will receive a very severe condemnation.” Jesus says:

“Beware of the scribes, who like to go around in long robes and accept greetings in the marketplaces, seats of honor in synagogues, and places of honor at banquets. They devour the houses of widows and, as a pretext, recite lengthy prayers.” (Mark 12: 38-40)

Jesus describes the scribes’ wrongs against the worshippers, and he condemns them most powerfully. They use their outwardly good reputations to mask inner aggression and the taking advantage of others. The worst – foul enough behavior to earn one of the few recorded angry responses from our Savior.

What happens next? Are the widows angry and violent in return? Surprisingly no. As we continue to read, we hear in particular of the selflessness of one widow. She gives generously, contributing two very small, but very dear coins to the Temple treasury.

What about Jesus? Does he remain angry? Does he throw the scribes away without hope, into eternal darkness?

Certainly not. Jesus continues his public ministry, teaching to and praying for all of us, inviting us to follow him – the Way, the Truth and the Life. In the ultimate fulfillment of the sacrifice foreshadowed by the widow’s two coins, he dies on the cross. Not just for the widow but for the scribes, too. He dies not just for our young, incarcerated Daniel, but for the person who whipped Daniel so cruelly as a child. And for the person whom Daniel later violently attacked, an action that brought him to prison.

Rather than throwing people away, we see Jesus treating all of us humans as, well, human. What can we learn from the example of our Savior?

First, we should never tire of pursuing the Truth, even when discouraged. Jesus, who is the Truth, never stopped teaching it, even when angered by malicious behavior. Second, we can learn to treat those who we think are in error with patience, compassion and forgiveness. We shouldn’t condone wrong behavior, but we shouldn’t give up either. And third, in the end, we can sacrifice even for those whom we think cause harm. The widow responded with generosity, and so did Jesus.

For Daniel, steps toward patience, compassion, and forgiveness are happening now, and he is already sacrificing. Perhaps the learning and contemplation going on in our class will help him and the other men find ways to respond to future attacks with unwavering love, the only Way that can truly defeat violence.

Perhaps we can, too.

2.    Introspection: Like the scribes in the Gospel, do I seek honor and praise, giving my due without sincerity? Lord, help me to avoid the pitfall of self-righteousness. Help me to avoid the temptation of looking for honor, especially to feed my own ego or to cover my sins. Help me to love even those whom I believe are sinful.