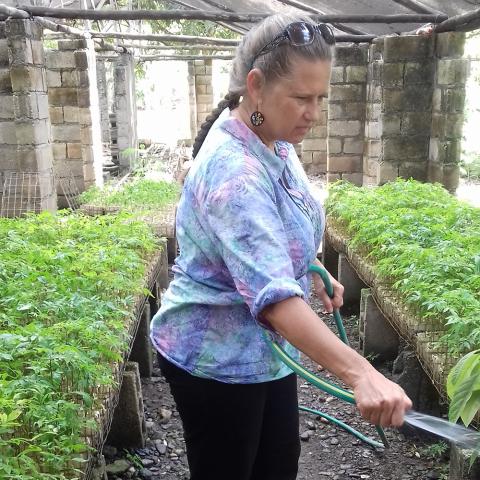 Sami Scott, a Maryknoll lay missioner in Haiti, formerly in Cambodia, reflects on God's desire to heal us and give us life, which we help enact through service of one another.

In the first reading from the book of Wisdom, we hear that that God did not make death, nor does God rejoice in the destruction of the living. For God fashioned all things that they might have being; and the creatures of the world are good and “wholesome.”

Srey Bopha* was a client at the Maryknoll Seedling of Hope project where I worked in Cambodia. She had contracted HIV/AIDS from her husband. She and her husband were very sick when they entered the project, but thanks to the care of our doctors and fieldworkers, they were able to get antiretroviral (ARV) drugs to control the disease and be healthy enough to exit the project and live on their own means.

Srey Bopha eventually got a job at another Maryknoll project, were I worked after Seedlings, as a preschool teacher for Vietnamese children. She is a good teacher, always smiling, and patient with the children. She was also able to get a house through Habitat for Humanity.

The shorter version of the Gospel for this 13th Sunday in Ordinary Time omits the story of the hemorrhaging woman whom Jesus heals, but her story and faith are an important lesson for us. For many people today, people living with HIV & AIDS are as taboo as the woman with the hemorrhage in the Gospel. They are considered unclean and unfit for civilized company. The woman in the Gospel had the faith and courage to risk the crowd to touch Jesus so she could be healed. Srey Bopha also had faith and courage to accept the help of Maryknoll so she, too, could be healed.

There are Christians who rejoice at the death of those with HIV/AIDS. “They are sinners and deserve what they get,” they say. Yet as the first reading proclaims, God does not rejoice in the destruction of the living. When the hemorrhaging woman touched Jesus, he did not rebuke her for daring to touch him, making him unclean too, in the eyes of society at the time. Instead, he took the time to seek her out and praise her for her faith. He did not rejoice that she was sick but healed her.

Jesus was constantly ministering to the outcasts of society: the lepers, blind, lame, and others, like the bleeding woman of today's Gospel. He healed them and brought them from the margins back into society. I think it is also important to note that he didn't patronize them. He asked what they wanted from him even though it might seem obvious. He didn't just walk through a crowd, healing people whether they knew they were sick or not, but he had a conversation with them to ask what they wanted from him. He saw them as humans who had value in and of themselves. They had a choice to ask for healing.

I believe it is our call as people of faith to not only seek out the sick and marginalized, whether it is physically, mentally, or spiritually, but to help heal them. Maybe we cannot completely heal them, but we can give them life, value, and dignity. Maryknoll efforts not only helped Srey Bopha recover her health, but her job enabled her to break out of dependency. We also helped connect her to Habitat for Humanity and a house so she has security and does not need to sleep on the streets. Most importantly, we saw her as a person, as a creation of God, and as with all beings, “wholesome” and good.