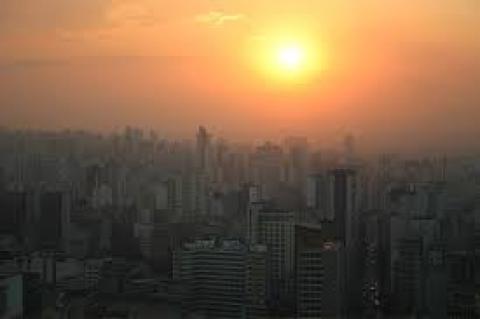 "…the people who sat in darkness have seen a great light, and for those who sat in the region and shadow of death light has dawned." (Matthew 4:16)

Today's Gospel quotes these words from the prophet Isaiah as a prelude to Jesus calling forth his first disciples and initiating his ministry of preaching and healing. The experience of living in darkness and feeling overshadowed by death is common among survivors of extreme trauma. In my experiences of working with healing trauma, I am often overwhelmed by the amount of violence in our world. Some people with whom I work on the periphery of the city of São Paulo in Brazil live in the context of the threat of violence every day.

Recently a small Christian community leader was recounting to me that people were even feeling scared to venture out of their homes for an evening prayer service or a community meeting because of the common occurrence of violence in their neighborhood. The root causes of much of this violence are unemployment and drug trafficking fueled by widespread poverty.

Violence and greed are not only devastating the human population but also our fragile ecosystems upon which the survival of all life is contingent. I am deeply saddened as I see, and smell, the extremely polluted Tietê river which runs through the city of São Paulo. Since the 1950s this river has become increasingly polluted from domestic sewage and industrial waste. What a horrific sin it is to pollute the fresh water natural resources upon which all life depends!

Jesus confronted sin and evil in the world by preaching repentance and proclaiming that the kingdom of heaven is close at hand. He called disciples to follow after him as he went about proclaiming the Good News of the kingdom and curing all kinds of diseases and sickness among the people. Through my work with healing trauma, I have learned that often acts of violence are committed when people dissociate or disconnect from their own bodies and the world around them. This disconnection is aggravated by the growing individualism in our world today. In the midst of so much suffering, greed and violence, it is beautiful to see the re-connection of a person with their own body and the world around them as they are healed from life's traumas! The unmistakable beauty of healing shines through the smile on their face.

I am inspired when I see people who have been healed from their own suffering reach out to help others in response out of gratitude. One young woman in her 20s with whom I recently spoke explained to me how she suffered from depression and had tried to commit suicide three different times in her short life. She told me that she finally was able to escape that black hole of depression when she began to reach out to others who were suffering and give of herself in service to them.

In the northeast of Brazil, AFYA, a holistic health center founded by Maryknoll Sisters Connie Pospisil and Efu Nyaki, is staffed entirely by volunteers who have themselves found healing through that center, which offers natural methods of healing as an alternative to the expensive pharmaceuticals that so many people are unable to afford. In the same way, I am inspired when I meet so many young people here in Brazil who are concerned about the destruction of our environment and who commit themselves to doing something creative to make a change for the better. One example is the work that Maryknoll lay missioner Flávio Rocha has been doing with the "Theater of the Oppressed," where young people pick a topic of social concern to them and make a dramatic theatrical presentation in a public arena. They present the problem and then invite spectators from the crowd to enter into the scene and present a creative solution.

Jesus is calling us today to repent for the Kingdom of God is at hand! He calls us onto the stage of life and invites us to present a creative solution to heal the social ills which bring about so much suffering through greed, violence and environmental devastation. Do we have the courage and faith to respond? Maybe alone we don't, but together with others we can! That's why we gather together as Church to support one another in faith and to be nourished through the Eucharist so that we will have the strength and the courage to let the light of the Good News of Jesus shine through us!