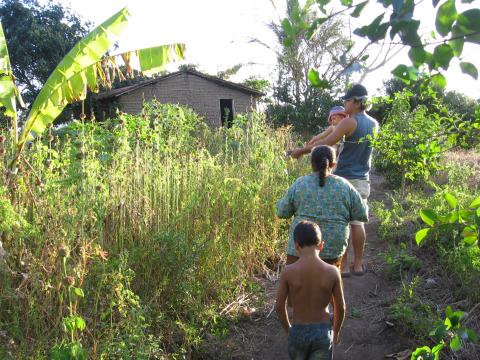 Maryknoll Lay Missioner Kathy Bond reflects on the witness of the Samaritan woman at the well in light of her work with women's groups in Brazil.

The story from today's gospel is well known. Jesus’s love and acceptance of the Samaritan woman, who belonged to an ethnic group despised by the Jews, continually teaches us to embrace marginalized people and communities in our midst.

What strikes me, and what I would like to highlight today, is the posture and empowerment of the Samaritan woman, a person with such low social status we do not even know her name.

The Samaritan woman’s presence at the well during the hottest part of the day suggests that other women shunned her because of moral judgements surrounding sexual behavior. She did not collect water when the other women did because they did not accept her.

Of course, she was shocked when Jesus spoke to her. Not only was she a woman, but she was a Samaritan, an ethnic group marginalized by the Jews at that time.

But she never kept quiet. She did not run away from Jesus in fear or shame. She did not deny or make excuses for her behavior. She sat, listened, asked questions and even ran back to the people who were shunning her and invited them to “Come, see a man who told me all that I ever did.”

In my 25 years of mission in Brazil, I have met many women who remind me of the Samaritan woman at the well. Here I will highlight Dona Silvana.

Most Fridays I go to the organic market at the University near our home in João Pessoa, in the northeast of Brazil. Dona Silvana and her son and daughter sell sweet potato cakes, collard juices, and cheese and coconut-filled manioc flour wraps. When Silvana was a young woman, she found herself landless with hungry children and a husband out of work. She joined a social movement which was organizing landless people to occupy idle lands in order to press the government to enact the constitutionally mandated land reform of unused tracts. She became a leader in that tent community as the occupation dragged on.

In the face of police and landowner violence, the community tactic was to put the women on the front lines in leadership roles, in the hopes that this would make the violence less extreme. When the group finally gained land titles, many people, including Silvana’s husband, expected the women to step back into their traditional gender roles of domestic chores and child-rearing. Silvana and a few others refused.

They invited me, Maryknoll Sister Efu Nyaki, and some of our Brazilian colleagues to begin a women’s group to help them deal with mental health issues, domestic violence and lack of health information and resources. We spent two years there, and then moved on to other groups of women, as was our custom. One of the modules we offered was about alternative health foods, where Silvana and the other women learned some of the recipes that Silvana uses today to earn a living.

Through Silvana and countless other women that I have met in mission in Brazil, the feistiness and empowerment of the woman at the well lives on.