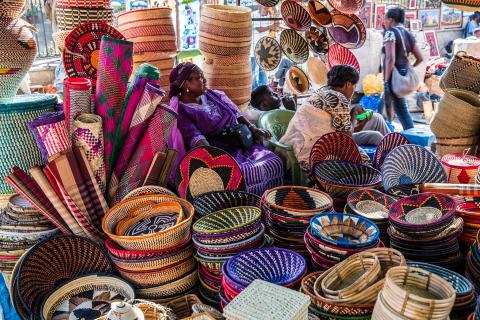 Maryknoll Sister Teresa Hougnon in Kenya reflects on the transformation that happens when we enter into conversation with our enemies.

In today’s readings, we hear about the people who were thirsting for water. The Israelites grumbled to Moses because there was no water, and Moses cried out to the Lord. God then directed Moses to strike the rock and the people’s thirst was quenched. At Jacob’s well, a woman came to fill her jar with water and she encountered Jesus. He offered the woman living water that would quench her thirst, and she would “never be thirsty again.” Water seems to be central in these stories, but I would also invite us to look at the interactions of the people. These people needed water, and through conversation, they received what they needed.

As the woman approached Jacob’s well, Jesus asked her for a drink. This was a surprise for her because Jews did not regularly interact with Samaritans, and she said this much to him, “how can you ask me for a drink?” Jesus did not answer her retort, but furthered the conversation by saying “if you knew the Gift of God and who is saying to you . . .” The woman responds by saying you don’t even have a bucket. The conversation continues as Jesus offers the living water.

Yet when the woman asks for this living water, Jesus extends the discussion by asking her to bring her husband. Much is revealed through the conversation: the gift of eternal life, the truth of the woman’s life, her belief in Jesus as a prophet. The woman had come to the well as a marginalized member of her community because of her sin. She came to the well alone and when no one else would be there. Through conversation with Jesus, her sins were revealed, she was offered eternal life, and her life changed.

The conversation moved the woman so much that she went and proclaimed what she had heard to the people in the town. And what they heard and saw in her new person brought them also to believe in Jesus.

For 12 years, two other Maryknoll sisters and I have worked in different parts of Kenya to facilitate what we call "conversations for social change." We have found that when people are offered the opportunity to take the time to sit together and have a conversation, they can move past the conflicts in their communities.

Kenya has been ravaged with cyclic violence that happens every five years after elections take place. This began in 1992 with multi-party politics. Every five years since then, during the election period, ethnic violence is stoked to support one party or the other, usually along ethnic lineage.

Our first experience of this as a team was in 2007-08, when the violence was particularly harsh and extensive. We designed a program to bring together people of diverse backgrounds to discuss their difference and to get to know each other better. We did not know that it would become a program of healing and reconciliation for communities that had fought each other to death and destruction.

When we began the conversations for social change in Nairobi in 2008, the country was still tense from the elections. The conversations became a space for people to share their stories, to heal the pain, and to find solutions. We have organized the conversations in four other parts of Kenya and have met with over 400 people in eight years. The participants have told us that when they return to their communities with changed hearts and changed minds, other people are inspired by their change and seek out joining the program themselves.

When we sit down to listen to each other and to share our truth, we connect with one another at the spiritual level. As we remain in conversation, the Spirit moves and truth is revealed, and then, as God is present among us, the Living Water can flow within us. We open our minds and our hearts to one another.