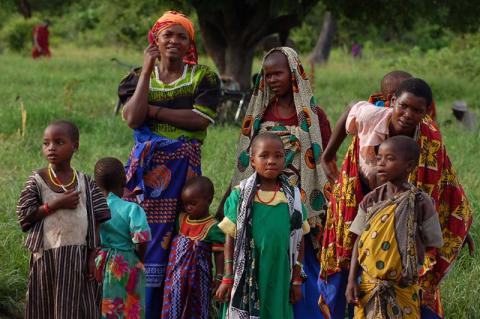 A woman and a man meet at a well, on the edge of the wilderness. Why is the story of their encounter presented to every adult catechumen before baptism?

While there are obvious baptismal connections – the theme of living water for example – this story can be read on many different levels. John’s gospel puts before us unlikely people as the ones who can teach us because they were changed by meeting Jesus. The authority of their message comes from experience and not from status. As the Samaritan woman shows us, these people are often the lowly, the wounded and the excluded.

The woman of Samaria is one of the many unnamed people who populate the pages of the New Testament. We never learn her name nor does she learn the name of the Jewish “prophet” who asks her for a drink of water.  She seems to be an outcast or one who is shunned as she draws water alone, at noon. Maybe other women don’t want to associate with one who has had 5 husbands.

Yet, something happens during their brief conversation that draws her into a relational experience out of which she discovers the messianic identity of Jesus and becomes a courageous messenger of good news to the people of her village. Imagine how hard it must have been for her to tell them that she had found yet another man at the very well where Jacob and Rachel first met. They must have groaned.

This woman would seem to be an unlikely teacher for adults hoping to be baptized. She is wounded by abandonment. None of her relationships with men seem to work out. Yet, the encounter she has with Jesus was such a profound experience that it give her the courage and the authority to say to her own villagers “come see a man who told me everything I have done. Could he possibly be the Christ?”   Maybe the message of this story is that even ordinary folk, once baptized, are meant to be messengers of the good news.

The Gospels often put such ordinary, unlikely and often lowly people before us as the ones who can really teach us what it means to be a follower of Jesus. Missioners learn this soon and often.

I recall meeting Sayi, a young woman in Tanzania. She was just a girl of about 10 years but she taught me a lesson about living the good news. One year, during a drought, Sayi had tagged along with her mother to enter the adult catechumenate. Despite our best efforts to exclude her because of her young age, she insisted on being part of the RCIA community. There was something about her dogged determination in the face of adult opposition that intrigued me. We relented and Sayi was included in the catechumen group. She was initiated into the life of Christ at Easter and, like many other newly baptized, returned to her far-off village.

About a year later, as the extreme drought became more extreme and serious food shortages spread through Sukumaland, Sayi appeared one morning under a tree in my backyard. She stood balancing a heavy load of firewood and was resting after a mile walk in from her village. I asked her what she was doing up so early and her earnest reply was startling. She told me she got up every morning, gathered firewood and carried it to the trading center a mile further down the road and sold it to local Arab merchants. With the few shillings she earned she bought a kilo or so of flour, took it home to her mother to help feed the family.

As I reflect on this girl's gritty determination, both her stubborn insistence on being included in the adult catechumenate as well as her unbelievable struggle to combat hunger in her own family, it made me examine my own commitment to be with the people who were facing the devastating effects of drought and famine. I learned that if we want to mix our spirits with the lives of the ones who are left to shift for themselves when misfortune arises, we too should be ready to do what we can to combat the forces of indifference that would say "leave them to shift for themselves." By baptism, we become people who seek to include others in our lives no matter their accompanying characteristics.

Photo: Women and children of Sukumaland, Tanzania. Photo by Flickr user Paul Shaffner and made available in the creative commons 2.0.