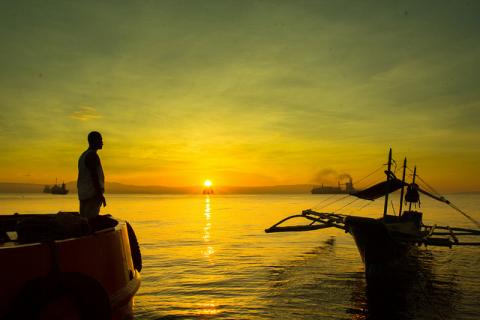 Maryknoll Father John McAuley describes the ways Jesus' life and teachings offer us "markers that keep us on target" during times of change and challenges.

In this time of many changes and great challenges for us, our nation and our world, it is important for us believers to focus occasionally on those markers that keep us on target as we continue on paths of life that may have become unrecognizable to us. The scripture readings today give us four markers that remain unchanged and that point to enduring and transformative truths that allow us still to venture out.

The first Marker shows us the destination and is found in the Gospel and the Acts of the Apostles. It says in the Gospel that Jesus opened the minds of the Apostles to the scripture; that all the waiting, that all the hoping has come to fulfillment. Peter reflects that understanding in Acts when he uses multiple Messianic titles found in the Hebrew scriptures and applies them to Jesus. But for both Jesus and Peter that does not mean that we now simply sit back and live in a state of “job finished”, for, something new is now promised and begun, and we are part of it. Two new promises have been made by God through Jesus’ cross and resurrection.

The first promise of the cross and the resurrection is that all sin is forgiven and that sin’s power over us is broken. Our world is fully empowered to be a world-after-sin. And so, our life’s mission now is the mission that was Jesus’: a mission of mercy, of forgiveness of sin and of healing sin’s effects. When this mission nears completion and sin’s mastery over us is no more, then the second new promise found in Jesus crucified and resurrected will be fulfilled: death as we now know it will be no more; we shall be as alive as the Risen One. And without sin and death, our world will truly be a new creation! So, when we ask where all this is heading, this is where the world and we are ultimately heading!

The second Marker given today awakens us to just how personal is our commission as prophets for this truth to our world. It was ordinary people in the community who first encountered Jesus Risen. And, they ran to tell the Apostles, but the Apostles were still surprised when they themselves encountered Christ. And we are like them. We have learned the basics of faith but are still surprised when we our own eyes are opened in personal experience. We often exclaim: “It seems so real, just like He were right here!” Well, He is right here with us, and it’s a simple, open heart that allows us to see and touch Him, and to be touched and embraced by Him.

The third Marker is given us today to engender confidence. Jesus appearing to the disciples of Emmaus and to the Apostles in the Upper Room sounds so wonderful, so intimate and immediate. But we too gather as purposefully as those disciples and Apostles. We gather regularly, hoping to encounter Jesus. And Jesus uses the scriptures to open our minds to who He is for us and for our world right now; and opens our eyes to the mission He is performing for us and with us, right now; and He joins us at the altar-table, sharing our broken humanity in the bread he breaks with us, His Body broken for us. Our Mass is a disciple-experience of Jesus, resurrected, alive and with us now.

The fourth Marker given us illumines our own transformation. The resurrected Jesus was not immediately recognized. Why? I believe this is because of the Trinity: the Trinitarian Persons that empty themselves into the Other, and then receive back both themselves and the Other through the Other’s self-emptying, and then again give and receive back themselves; on and on. Jesus, our resurrected brother Jesus, now shares in that flow of Trinitarian Life. Jesus has given Himself fully to, and has been fully received by, and is now filled by the Trinity; on and on. And who has ever directly seen this Trinitarian image in human nature before? Well, we see it now in Jesus Risen, alive and active among us in witness that this world is undergoing radical transformation in becoming a world-after-sin. We see it in Jesus Risen, alive, and choosing our company and gathering us together as these transformations unfold and are resisted and continue to be accomplished.

And we begin to see it in us, we who have joined ourselves to Jesus Risen, and who have come to know the Father, and who have been filled with Holy Spirit. We increasingly embody the Trinity at mission in this world.