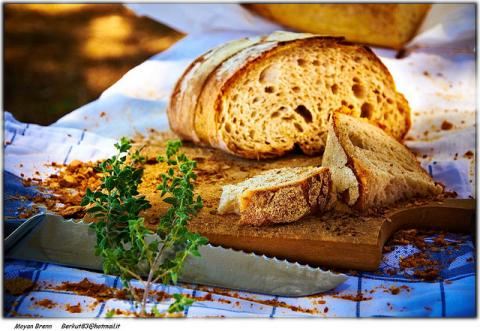 “And they knew him in the breaking of the bread …”

What are the moments when we see God in the face of others? The story of Emmaus delivers a message that allows us to see God's presence in different situations; to see the face of Jesus in others. It is the story of an encounter, meeting a stranger who did not quite look like Jesus but who turned out to be Jesus. Who knows how many times Jesus has passed you and me by and we did not recognize him.

Cleopas and his companion shared with the stranger for the entire journey. Not only were they ready to share their confidences with him, but they went to the end of the journey and shared a meal, the breaking of bread as well as shelter with him. It was in the process of this sharing at table when full knowledge occurred and they realized that the uninformed and helpless stranger was indeed Jesus.

Jesus is about relationships. Relationships give new meaning to our lives, faith and vocation. Jesus is in all and any person: male and female, poor and rich, young and old, all races and colors and in those that we know and in those that we don’t know. To walk through life prepared for the encounter and open to recognizing it is what mission is all about. As Pope Francis has energetically reminded us, we are called to go out to the street corners to encounter the other and share the good news of the gospel. The corner of course real but at the same time a metaphor. The good news should be shared in all places. Peter's sermon shows that he who had denied Christ now boldly confessed him. Peter talks about the miraculous pouring forth of the Spirit to awaken those listening to embrace the faith of Christ, and to align themselves with his church. It was the fulfillment of the Scripture, and the fruit of Christ's resurrection and ascension. The Spirit is given to enable us to understand, approve, and become a part of.

The psalm of this weekend tells us that it is God that shows us the path of life as Jesus did in Emmaus. He is present in the stranger and in the sharing. I lived 19 years in Chile as a Maryknoll lay missioner, mostly in the southern rural diocese of Linares. Ten of those years were during the dictatorship of General Augusto Pinochet. It was a time of great repression, fear and human suffering in Chile when thousands were killed and thousands more disappeared or were sent into exile. But it was also a time of many marvelous moments of seeing the face of Christ in others. Often the worst of situations brings out the best in others and helps the human person encounter God in many profound ways.

For the most part, the church took a strong and prophetic stand defending the rights of those who were suffering and strongly denounced the atrocities of brutal dictatorship. Our bishop, Don Carlos Camus, was one of the most valiant. During those years this gospel was often used in reflections and the church called the faithful and people of good will to see the face of Christ is those that suffered political oppression.

For several years I was the director of Catholic Social Services and Rural Development of the diocese of Linares. The office of legal and support services for the families of the detained and disappeared was one of our departments. Two lawyers, one of them another Maryknoll lay missioner, and a team of volunteers attended to the various needs of the many who had suffered the atrocities and impact of disappearance, unwarranted detention or exile from their own country.

I remember Cupertina Sanchez (not her real name) and her mother who witnessed the detention of her father and a brother. The local police took them from their simple rural home early on a Sunday morning a month after the brutal military coup which took place in Chile in September 1973. They were never seen again, and only in recent years Cupertina has been told of the probable destiny of her loved ones. Most likely, similarly to many other people, after excessive torture which led to death, their bodies were loaded into Armed Forces airplanes and thrown into the ocean many miles from the coast.

Cupertina and her mother never gave up hope or the struggle to find their loved ones. Their search and insistence often put them in harm’s way and in dangerous situations. But their love for their father, husband, son and brother and their faith in the "God of Life" gave them energy and hope to continue the search.

However, more than their own search, all of us who were close to Cupertina and her mother often saw the face of Jesus in them in the way they were present to others whose family members had disappeared or were detained because they were considered enemies of the government. They walk with them, shared with them, sheltered them and animated them to continue life's journey. They became Jesus of Emmaus for many discouraged, sad and depressed suffering people. And, some of those they ministered to were not people of faith. That didn't matter to Cupita and her mother. They ministered without exclusion or discrimination.

In 2003 Cupita's mother developed terminal cancer and prepared for death. This valiant campesina had dedicated the last 20 years of her life to the constant search for her loved ones, never giving up and to being the face of Christ for others. When Cupertina's mother passed there was still no resolve to the destiny of her husband or son. She never had a grave where she could lay a flower, light a candle or say an ave. But her encounter in eternity with her loved ones and the Communion of Saints must have been incredible.

Many are the instances where the Eucharistic miracle takes place and the face of Jesus is seen. In the story of Cupertina many of the encounters would have taken place over a simple table with a cup tea and a tortilla de rescoldo, a large round bread baked in the coals of the kitchen fire. It is that large round bread that brings people to the table and the breaking and sharing of that bread that brings about the encounter. As they shared the bread and shared one another's life struggles and faith, the face of Jesus was revealed.

May each of us continue to open our eyes and our hearts to the face of Jesus in those who suffer and who call us to a simplicity of life. We pray to have the same courage that Cupita and her mother had to reach out with open hearts and open hands to those who are different from us, knowing that even though the strangers on our way may not look like Jesus, but they may indeed turn out to be Jesus just like the lonely stranger on the way to Emmaus.