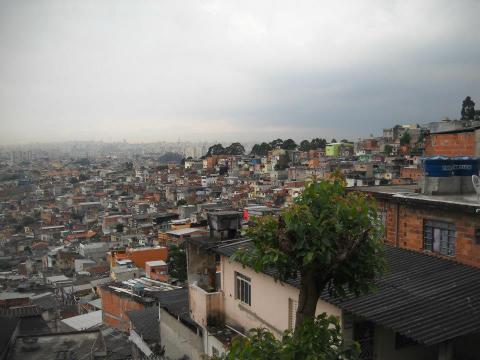 Fear and uncertainty have a way of paralyzing us. Violence creates a climate of fear that can eliminate the trust and security we need in life. Violence has a very strong grip on the city of São Paulo, Brazil. About 50,000 homicides per year occur in Brazil, four times as many homicides per year than the United States. The United Nations considers a situation where a country that has more than 25,000 violent deaths per year as living in civil war.

Photo of Brasilandia (São Paulo), in the neighborhood where Carolyn lives

Violence escalated in the city of São Paulo in the fall of 2012. In just two months, 220 people were killed in São Paulo, 144 in September and 176 in October. The increase was a result of targeted killings between the police and the city’s crime gangs. By November a curfew was established in some neighborhoods. Areas of the city that are normally full of life and energy 24/7 suddenly became quiet ghost towns after 10 pm. Fear echoed through the city and for a few weeks many evening events and activities, including evening Masses, were canceled.

In time, the violence and fear gave way to more peace-focused activities that began to create an atmosphere of hope among the Brazilian people. One tangible expression of this hope is the peace pilgrimage with the cross that is to be given to the pope when he attends World Youth Day this summer in Rio de Janeiro. This cross has been traveling around Brazil and has visited numerous neighborhoods, including the community of Brasilandia, which has experienced increased violence in the past year.

In the gospel reading today (John 21:1-19) we hear the story of the disciples fishing one night and catching nothing. In the morning Jesus calls to them and suggests they cast their nets off the other side of the boat. They do and catch an abundance of fish. Even before the disciples recognized the man among them as the Messiah, they were open to new possibilities and new ways of doing things. They were open to trust each other’s advice. Trust is possible when individuals feel safe. Trust is unlike fear, which can grip people and cause them to shut themselves off from others and withdraw in order to protect themselves.

In this third appearance of Jesus to the apostles after his crucifixion and resurrection, we hear how Peter recognizes him, jumping out of the boat to get to him. Three times Jesus asks Peter, “Do you love me?” to which Peter responds with unfailing certainty, a positive parallel to his earlier denial of Jesus. At that earlier time, fear had overwhelmed Peter. But today’s gospel illustrates Jesus’ love and forgiveness. He allows Peter the possibility to profess his love three times and does not chastise him for his denial. Instead, Jesus calls Peter to love and service. Jesus knows that fear can make us turn inward and focus on ourselves but his call is to move beyond fear to love. Love calls us to focus on others.

In the first reading (Acts 5:27-32, 40B-41) we hear how the apostles were ordered before the Sanhedrin and told to stop speaking in the name of Jesus. The apostles rejoiced that they were found worthy of dishonor for professing the life of the savior – they were able to overcome a situation that was indeed frightening. By living in the hope of Jesus and in solidarity they faced the court, able to find joy in their call. We know that they would suffer greatly in their lives and yet they found hope in their faith and purpose in their call to follow Jesus.

That day in Brasilandia, as I followed the World Youth Day Cross as it was carried through the streets, I saw families wearing t-shirts that bore the photos of lost loved ones. I saw the families weeping and holding one another. I saw old women and children standing in doorways waving as we passed, I saw young people singing and laughing. I saw a community that was doing its best to say no to fear and violence. I saw a community professing its faith in the savior and who believed that love could overcome fear. I witnessed a community that was saying, “Yes, Lord, you know that we love you, and yes Lord, we will follow you.”