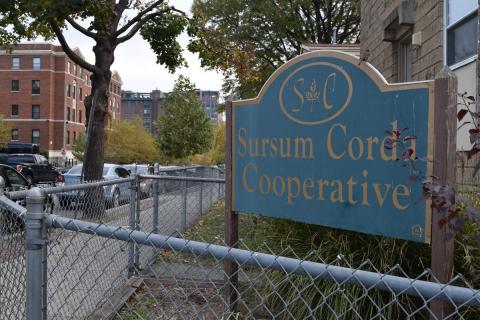 Nonviolence and Peace Fellow Kevin Carroll reflects on the cry of John Baptist and the cry of the poor.

The gospel reading for the Third Sunday of Advent comes from Luke. In it, we hear about the ministry of John the Baptist. He is the voice crying in the wilderness, telling the crowds before him, “Whoever has two cloaks should share with the person who has none. And whoever has food should do likewise.”

This exhortation, in particular, has a way of consistently cropping up for me during my commute to our office, the Maryknoll Office for Global Concerns, in downtown Washington, D.C. Walking through the city, as in many cities, it is not uncommon to encounter people asking for or in need of basic living necessities.

As I walk from the NoMa metro train station (formerly named the New York Avenue metro train station) – the recently rebranded NoMa is short for "north of Massachusetts Avenue" and  indicative of the gentrification happening in real time – I pass a tent on the sidewalk with a cardboard sign written with a shaky hand: “HELP HOMELESS.”

Making my way west to work, I pass a newly constructed two-way commuter bike lane, two new shops – a publicly traded coffee shop and a grocery store whose combined revenue last year exceeded $145 billion – as well as modern, high-end apartment and office buildings. All of this is surrounded by seemingly ubiquitous construction, the most recent of which is happening on the block next to the Maryknoll office: the demolition of a 199-unit-low-income housing complex constructed in 1968 and named Sursum Corda which means "Life up your hearts" in the Latin Mass, thanks to the Catholic sisters who once lived there. It is a neighborhood changing to suit the lifestyles of its new inhabitants and passersby, myself included, rather than the needs of the generations-old African-American community it is simultaneously displacing.

I walk with and pass by unhoused neighbors on a daily basis, people who are seeking the warmth of the extra coat or the spare food John the Baptist references in his cry. And I, like so many others, have given the coat, spared some change, or shared food. However, this cry feels more urgent than these simple works of charity.

Advent, it is said, is a time of hopeful waiting and preparing. As Stephanie Buckhanon Crowder writes in True to Our Native Land, “For Luke the gospel...is not merely a spiritual changing of mind or a turning from one’s former ways; it has at its core the obligation and duty to empower all to complete living.”

The author of Luke’s gospel writes that John the Baptist “preached good news to the people.” The good news to the people, i.e., the poor, is Jesus’ identification with them. The Gospel introduces a praxis of love that shares. The rich are criticized and then converted. “Luke is the voice of the poor and the judge of the rich,” writes Dr. René Krüger in Luke’s God and Mammon, A Latin American Perspective. The message is a call to an economic conversion irrevocably intertwined with salvation.

The Gospel of Luke “positively affirms the value of riches, appreciating their importance for human life, especially their ability to assist the poor. They call for the creation of a society in which all the people have the means to live with dignity; a goal achievable only if the rich become poor themselves through sharing their riches with the poor.”

Theologian Jon Sobrino writes that “poverty...is the most lasting form of violence and the violence that is committed with the greatest impunity.” Our cities, our countries, our world is plagued by the violence of poverty and John the Baptist’s ethical preaching in Sunday’s Gospel shows us another way, one with salvific promise.

What would it look like for the newly minted NoMa to give its second cloak to those who are losing their community? How about for the behemoth grocery chain to ensure that the surrounding population be fed in a manner befitting their inherent dignity instead of gorging itself? I, along with many others, intend to continue to pose these questions but I don’t know how much longer the survivors of this violence in front of me can wait.