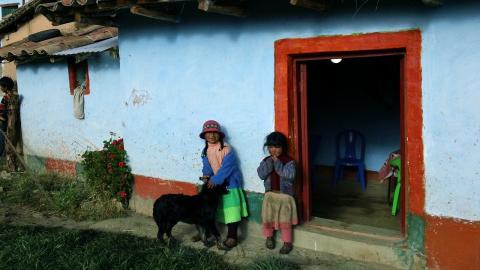 The great themes running through the readings of these Advent days are darkness, light, and waiting. In addition, we are invited to see through the eyes of the stranger, the poor, the captive and the broken-hearted; and because the Sacred Scriptures contain the whole story of the great journey through life, today, we are also invited into joy, even to exultation because Christmas draws near.

On December 21, just a few days from now, this planet that is our home will pass through the longest night of the year in the Northern Hemisphere, the winter solstice; and although winter is just beginning, the days will start to lengthen and the hours of sunlight increase. This is the cosmic setting that cradles the holiest of events in all the year, the birth of Jesus, the anointed one of God. It is as if the drama unfolding in the cosmos became the drama of the Son of God, who came as light into the night. It also becomes the drama of each person throughout time, who in the dark is drawn toward the light.

Some years ago, in Bolivia, I had an experience of darkness that I can never forget. I lived with another sister, a nurse, in a village in the Andes Mountains. Our principal work was to travel to very remote communities in the mountains to visit people who, truthfully, were deprived of all access to the benefits of modern life. The one thing they almost universally wished for was health care for the children. Ordinarily, we visited each distant community once a year, twice at most. We would set out in the morning and go as far as we could by jeep, and where the road ended proceed by horse or mule along steep mountain trails. Usually, we would arrive in a community sometime in the afternoon and do what we could to attend to the people. Then, we would spend the night and work again the next morning until noon, being careful to leave in the early afternoon to avoid difficult trips in the dusk or in the dark.

On one such occasion, sick people kept arriving in the early afternoon. Each time we tried to leave, someone else would appear. We were getting worried as the mountain trail was quite treacherous and we would have to make the whole descent on foot as the trail was too steep to go mounted, although one horse would accompany us carrying our sleeping bags, backpacks and other gear. Finally, we were ready to depart, but the guide who was to lead the horse had disappeared. We decided to set out with the hope that the horse and the guide would catch up. Before long, we realized that daylight was disappearing very fast and the horse was still nowhere in sight. We called out but to no avail. As you may have guessed, our flashlights were in our backpacks with the horse, and, there was no moon! All too quickly, there was no light whatsoever; we truly could not see the path one step ahead. We had to sit and feel our way forward. To add to our terror, we knew that up ahead at the end of the trail, we had to find a place to ford the river pouring down from the peak above. After several hours of inching forward, we were practically paralyzed with fear and exhaustion. We remembered seeing a house not too far from the river the day before, but then, in the pitch dark, we were sure we would not be able to spot it. By this time, we could hear the roar of the river, but we could not see it. When we were just about to despair of ever getting through that dark night, quite suddenly, the light of a kerosene lantern appeared up ahead.  I will never forget my relief at seeing that light. Approaching it, we shouted with all the strength we could muster and, to our immense joy, a woman with her entire household came dashing out of the house. With the lantern in hand, the woman took us to the river’s edge, instantaneously found the place to ford it and directed the men to take us across. Once on the other side, our new friends accompanied us until we located our jeep (at which point the horse appeared!).

I have been grateful for a long time now for the strangers who responded so quickly to our plight on that dark night, but only recently did I see myself as the stranger – the one who came unexpectedly to the door in need on a dark night. I think it might be salient this Advent to reconsider our stories, to reframe our narratives in terms of naming ourselves as the ones who have been the strangers whose fears have been assuaged, whose terrors in the night have been listened to, and whose exhausted bodies have been led to rest. Perhaps doing so would strengthen our capacity for welcoming the stranger for whom we might be a shred of light in the dark in these last days before Christmas.

Perhaps too, the waiting of Advent might be considered differently. We wait, and we are waited for. We find the One we are waiting for and the One who awaits us in the encounter with the other who crosses our path; at church, in the supermarket, across the street, in the office, on the highway, at home. We need to practice being on the lookout for the One who is waiting and coming. Truly, the experience of the Holy will come at any moment, but we must be watching, acting from generous hearts if we are to know it in the depths of our hungry souls.

Even in ancient times, our ancestors in the faith began to long for the coming of the Holy One. They sensed that their hearts were made for something far greater than themselves, something that would hold the boundless measure of what was true, and good and beautiful. To capture this boundless yearning, Isaiah the Prophet used the beautiful and contrasting imagery of the valley that would be exalted, the mountain and hill that would be brought low, the crooked paths that would be made straight and the rough places plain.

In the 1700s, these images were put to music in George Frederic Handel’s magnificent oratorio the Messiah. And now in our time we have the internet, a previously unimaginable tool that, in this case, brings us directly the words and imagery of the Prophet Isaiah and the music of Handel, the great composer and musician: Listen to the London Symphony Orchestra, conducted Sir Colin Davis, perform Handel's Messiah.

Finally, there is the relentless figure of John the Baptist. He stood by the river’s edge announcing that the light was just up ahead. He encouraged all to be deeply present to and aligned with the moment that was dawning among them. He knew that this was not easy, but he sensed that this was what would lead ultimately to exultation in the encounter with the Awaited One.

Photo: Children by a doorway in Bolivia. Photo in public domain via Pixabay.