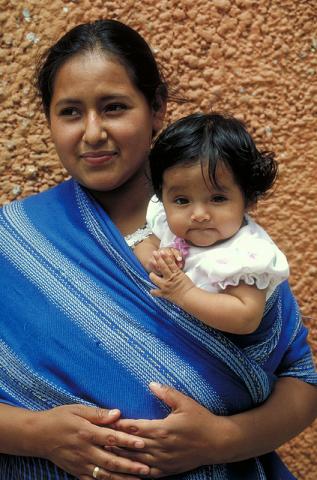 Photo of Guatemalan mother and child from Bread for the World

If today’s readings were parts in a play, which part would you choose? How many grieving mothers who have lost their children are just hoping they can be the widow in the scriptures? They are longing for God to bring back their loved one, to relieve them of their agony. Perhaps we have met women who’ve been the other widows, or maybe we ourselves have played the role of the mothers who ask themselves, “Why me, God? Is my faith not strong enough for you to bring back my child? Did I deserve this?”

And then there is the part of Paul, of course, who doesn’t immediately respond to God’s call – it seems like he has to “think about it.” He’s that guy who sits on the fence and then gets to be the hero of the story. Are we someone who envies the people in our lives who don’t seem to suffer as much as we do.

Theologians, lay people, ordinary people, believers and non-believers have been trying to figure out the meaning of suffering for as long as there has been pain. We can look at it in the abstract, we can ponder it in courses, retreats and in quiet prayer, but however I look at it, I choose not to believe that God is willing it on us so that we can understand and love God more. No – suffering is simply painful. The widow did not need to live through the agony of her child dying only to have Elijah revive him, nor did she need to be tested. But her child was revived, and she did rejoice, and her suffering ended. Good did come out of death. That is to be embraced.

The faith of so many I have encountered in my time as a missioner ranks close to those people whose stories are told in the scriptures, yet their losses and suffering continue. In times of loss and grief it is so difficult to belief that death can result in life. Perhaps not so simply as in the scriptures, but with contemplation, time and prayer, one can see the good things that have happened since the death of a loved one.

Many years ago, as a missioner in rural Guatemala, I worked with a small group of women who visited the sick in a tiny village parish; they called themselves the “visitadoras.” Through a series of leadership workshops we trained the women to respond to their community needs.  At our “graduation” I remember, Paula, a young lady barely five feet tall proudly holding her small child, Luis, in her arms. Standing next to her was Maria, childless after four years of marriage.

A few years later when I was visiting the community I stopped in at Maria’s home. There she was, with her beaming husband. In his arms was a beautiful baby girl. Having been there just a few months before, and remembering hearing Maria’s story of how she still was not pregnant, I was puzzled.

Maria recounted how a few weeks earlier she and the other women in the group visited Paula after her second child, a baby girl, was born. Paula died a week later from an untreated infection. Left with little Luis and a newborn baby girl, Paula’s husband made the difficult decision to return with Luis to his family’s home in another part of the country. He “gifted” the baby girl to Maria and her husband.

I will never forget the family photo I took of Maria, her husband and newly adopted baby who they named Lourdes. Their life was the fruit of suffering. It had nothing to do with faith, or lack of faith, or punishment, but it was indeed, a gift, and, God was present with them through it all.