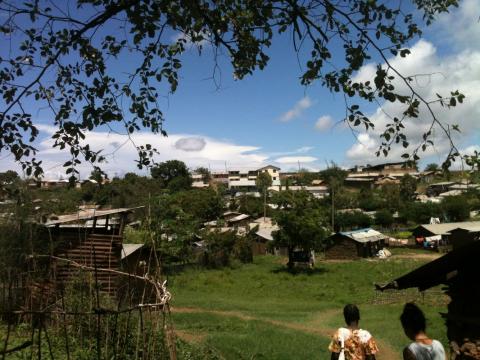 The theme for today is (re)birth. It is the first day of a new year and people are making all sorts of promises about how this year will be different. We Christians are also in the midst of celebrating the birth of Jesus.

When Jesus was born, the shepherds celebrated God in him. They did not rejoice over anything he had done, but his mere presence. Likewise, one hopes that every person has someone who celebrates God in each of them, their special presence.

I had the privilege of working in St. Francis of Assisi Primary School in Kibarani, Kenya, an informal settlement that is infamous for being filled with robbers and drug addicts. When I tell people about my work they say, “Kibarani? There’s a school there?”

Situated across the highway from Timboni dump, smoke from the burning garbage and the factories is almost always in the air. Ashes fly into the beans and rice that my kids eat for lunch. At the same time, accidents on the highway are quite common. Pedestrians often get hit by oncoming traffic as they attempt to fetch water or catch a ride in the opposite direction.

During my first year at the school, I had a student named Hamisi. Hamisi would never listen during lessons and was always cheating and beating up the other kids. In fact, the other teachers and even his mother thought he was possessed by demons. Nobody could control him.

One day, I walked into the staff room and found one of our teachers standing over Hamisi with a stick about a meter long. The teacher had taken a windsock used in a demonstration for science lesson and was about to beat Hamisi as he lay on the floor.

As soon as the teacher saw me, he pasted a smile on his face and started pretending to teach, saying, “What is this?” and gesturing at the windsock towards Hamisi. Caning, though a frequent occurrence at our school, was made illegal in Kenya in 2010. As the only “white” teacher at our school, the teachers were hesitant to cane the kids in front of me, fearing that I would report them to the priest in charge of the school. They told me over and over again that they were not caning the children, even though I heard it through the walls.

I took Hamisi to the library where we attempted to have a conversation about what had just happened. He was silent to all of my questions, probably afraid that I would beat him too or afraid of repercussions with the teacher.

Finally I asked in my very poor Swahili, “Hamisi, are you good or bad?”

I explained to him that there are no bad people because we are all children of God. We might make choices that are bad, but we ourselves are never bad, never beyond redemption. This kid, whom I had never seen cry – even after being beaten with large sticks and pinched in the cheek and made to squat for long periods of time – began to cry. When I told him that I loved him and saw his goodness, he began to sob.

Hamisi, believed himself to be a demon, to be bad, to be beyond redemption.

As it says in today’s second reading from Galatians, we are not slaves, but sons and daughters, heirs of God: “God sent the Spirit of his Son into our hearts crying out, ‘Abba, Father!’”

The same Spirit is in all of us. If we try, we can see God in one another, in everything around us.

Sometimes, all it takes is someone saying, “I see your darkness and your light. I love you,” to begin again. Rebirth is happening all the time. Like Mary, let us keep all these things and reflect on them in our hearts, the things that have happened, are happening, and will be.