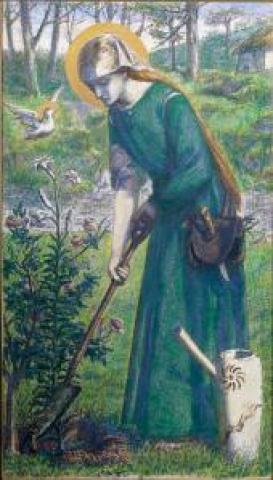 Fr. Mike Duggan, MM, who served in Korea, wrote the following reflection. It is also published in A Maryknoll Liturgical Year: Reflections on the Readings for Year B, available from Orbis Books.

Remember you are dust and to dust you will return. The earth, this planet we live on, is the source of our beginning and similar to a mother who raises and sustains her children while they live. Every culture and time has recognized in some way the nurturing and productivity of the earth often using the feminine image of a mother or goddess. The connection to Earth was a desire to understand its role as a source of life for her children.

Long before the patriarchal religions became dominant, priestesses existed in cultures such as the Inca, Algonquin, Roman, Greek and Indian to name a few. Feminine gods were worshiped. In the Norse culture the nurturing sides of nature had deep roots; tablets written in the third millennium BC expressed the personification and creative nurturing sides of nature as female deities.

When I was missioned in Korea, I saw how Earth and its elements have been treated and respected. In the early days of mission, the family’s water supply came from wells. Each family had its own well and depended on it for most of their needs. Buckets were used to bring the water to the surface; before being carried into the house, a little water was scooped from the bucket and thrown on the ground. The gift was returned and acknowledged with gratitude.

From deep within Earth came life for cooking and cleaning and bathing and for sanctifying sacred shrines dedicated to the ancestors and the spirits of each room in the house. Such life must not be depleted, and so it was restored in gratitude for all that had been bestowed on the family.

In the Andes today, where the fruitful Earth is imagined with the feminine aspect of God, representing the abundance of Mother Nature and life itself, people still use a ceremonial cloth called awayo in Aymara and ilyilla in Quecha; the multicolored cloth with parallel lines represents the fertile Earth. Awayos are used to carry anything that has a relationship with life, fertility or natural abundance – babies, fruit, vegetables, etc.

We have very few details about Mary the Mother of God, but we can surmise much from the times in which she lived and the country where she was born and grew into a mature woman, wife and mother. In a small village in Nazareth a young girl pulled up her bucket of water from the well. Of a poor family she was close to Earth and benefitted from its produce; she praised God for this wisdom and foresight. She could run the dry earth through her fingers as children often do and feel the good earth from which she came.

Was she the daughter of a farmer or the daughter of a fruit and produce merchant? Did she work a farm as women would do if they were poor or did she polish the fruit and arrange for it for sale? Did she rise early and say her prayers as the sun rose and people rubbed their eyes and thanked God for another day? This child of Earth, did she feel the sun on her back and let the rain wash her face and praise God for both the sun and rain? Did she wonder where the wind came from and where it went? Did she wonder how deep was this earth, wonder how big it might be and did she wonder at the number of stars and what made them shine? What did she wonder about these precious gifts given to her for her use and amazement?

“But when the fullness of time had come, God sent his Son, born of a woman.” When the angel left her and when she began to feel a child move inside her did she feel a special connection to Earth as many women do? Did she know that her son was God’s son and that he was no less so because he came from Earth; that God had made his home here with her and her husband, Joseph? When her son grew in age and wisdom and began his journey that took him to the hill of Calvary where his blood fell on the parched Earth, did she know this precious blood was blessing the Earth from which they came?

God created this Earth to sustain us, to give us life, to join God in the ongoing creation of the planet which is our home and so God’s home. God’s son was sent through a virgin to bless and sanctify this earth by his own life and death and resurrection – through his example he taught us how to love and cherish this Earth and how to live in harmony with one another.

So it was that Mary would truly be our mother as she was Jesus’ mother, the mother of God, mother of all life lived on this Earth – with all its potential for the fullness of life promised us. As a child of Earth she wishes the reverence due it. As a mother she calls us to protect it even as we thank God for sustaining us through the goodness and generosity of the soil, the wind, sun and rain. She calls us to see all Earth’s elements as expressions of God’s love and her love for all her children.

As Mary cares for all her children we must care for all who share this planet so that its fruits will be available to all. Like Mary we should run the soil through our fingers, wonder at the greatness of nature, let the sun warm our backs, let the rain run down our face and realize how precious these gifts are to us. As we revel in this abundance let us reflect how this abundance is meant for all Mary’s children.

Mother of God – Mother of the Earth – make it so.