Solemnity of All Saints 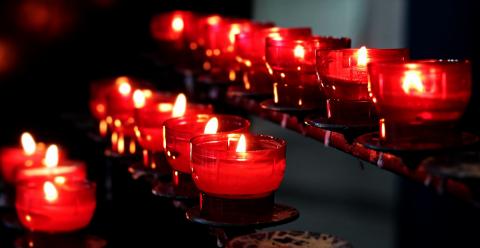 Fr. Daniel Kim, MM, reflects on the witness of the saints for today.

Today is a very auspicious and solemn day in the Church’s liturgical calendar because we are honoring the saints who were so influential in witnessing to God’s love, hope and charity through their lives.

Nevertheless, upon reading the lives of the saints we are often a bit surprised to see that many were not the “perfect angels” which they are often described as in popular imagery. In other words, many, if not all of the saints, led lives that exhibited controversy, shortcomings and doubt. This was true in the case of Saint Peter, who not only betrayed Jesus three times, but prior boasted how unrelenting his faith and courage was -- yet he was the one whom Christ entrusted the keys to God’s Kingdom.  Also Saint Mary Magdalene, for whom Jesus casted out seven demons, yet she was the first disciple to see the Risen Christ and first missioner of the Good News. And, of course, our colorful and checkered Saint Paul, who hunted down and killed Christians before his conversion on the way to Damascus -- yet without him, Christianity might not have proliferated to such a scale where we now have over 2 billion faithful around the world.

Apart from a few notable exceptions, such as, Saint Thérèse of Lisieux, Saint John Vianney and several others, many of the saints were not so different than you or I; that is, they exhibited all the flaws and weaknesses associated with being human. So why do we hold this day as a solemnity and as a high honor for those who were seemingly subject to fragility, misjudgment and unsavory exploits? I believe the simple yet profound answer to this question lies in their ability to recognize that God’s mercy and love transcended whatever shortcomings and mistakes they were responsible for; namely, the truth that God’s grace is greater than any sin capable of being committed.

The only way that we are rendered unredeemable is when, through our free will, we decide to reject the unwavering and magnanimous mercy and compassion of God. Granted, this does not excuse us of being accountable for our actions, something which St. Paul explicitly mentions in his epistles.

We know that the Beatitudes we hear to today from the Evangelist Matthew are tall orders to follow. On the surface they come across as ideals that perhaps only saintly people can adhere to. However, if we hold true and live by the faith of God’s unwavering love for us, despite whatever misdeeds we have committed, the Beatitudes become a source of guidance and hope rather than stumbling blocks.

The fundamental teaching of our faith is that God is the ultimate source of greatness and goodness and if we allow this to work in our lives, wonderful and even saintly deeds can be made manifest through broken vessels such as ourselves. This is critical now more than ever, especially during a time of pandemic, political and social unrest, and rampant hopelessness and despair that we as human beings feel we are incapable of redeeming. However, if we open ourselves to the Spirit, just as the saints in our canon have done, miraculous and life-giving energy will flow through our lives and deeds and the world will see the justice, equity and love that govern the Kingdom of God. This is God’s mission for all of us. So let us look to the saints for hope and strength -- that even as flawed and damaged as they were, they were able to give witness to God’s love, hope and charity in a way that redeemed the world.