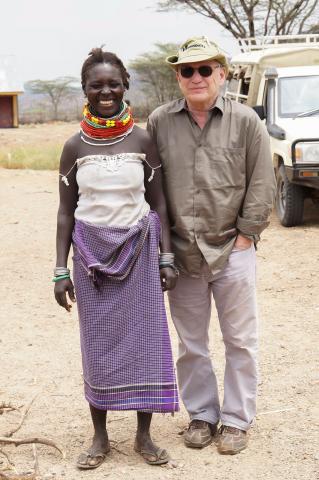 Fr. Lance Nadeau, MM, who is on mission on the border of Kenya and Ethiopia, reflects on Peter's encounter with the Gentile Cornelius and the importance of intercultural exchange for peacebuilding today.

The first reading for this Sunday from Acts of the Apostles begins, "As Peter was crossing the threshold" into the house of the "unholy, impure" (Acts 10:28) foreign military officer, Cornelius (Acts 10:25)...

Let's reflect on the reading's opening words: "As Peter was crossing the threshold…"

Through these words, we relive a life-crisis, a betwixt-and-between moment for the evolving messianic people of the Way (Acts 9:2), the early Christians, and their representative member, Peter, who is about to pass over into what cultural anthropologist Victor Turner calls the "realm of pure possibility." Cornelius was a Gentile, and Peter was a Jew. This was a critical moment of encounter.

Acts 10 tells us that God's messenger orders Cornelius to summon Peter to his home. Then an ecstasy falls on Peter. He has a vision of inclusivity: three times heaven breaks open, a great sheet holding all the animals and birds is lowered down, a voice commands Peter to eat, he forcefully refuses to question his self-identity and the social order by consuming what is unsuitable for an Israelite, the voice keeps insisting on the letting go of that Jewish practice, the vision ends, and a disoriented Peter tries to puzzle out the vision's meaning. As Peter undergoes the ordeal of the vision, inclusivity calls at the door in the person of Cornelius, the Gentile. Cornelius' summons has arrived. The Spirit orders Peter to accept the invitation without doubt or hesitation because the call is Spirit's own. Put to the test of obedience, Peter travels to Cornelius' door.

Peter, and in him, the people of "the Way," pass over this critical threshold, dying to their familiar ways of identity, community, and purpose, and entering the pure possibility of inclusion of Gentiles within Cornelius' house. Peter says to Cornelius: "I, too, am myself a human being" (10:26). And that self-recognition in and through the other opens the way for him and the people of the Way to enter divine inclusivity and community. The inclusivist new Christian Peter exclaims, "I get it. God isn't one to play favorites. In every people, God accepts those who fear God and work for justice" (cf. Acts 10:34-35).

This Scripture promises much beyond the crisis of betwixt-and-between. It is a word for the fault lines of ethnicity, culture, and religion that we experience today.

For several years, Maryknoll's Africa Region has worked with the Missionary Community of St. Paul the Apostle in supporting an interethnic primary school on the often-bloody border of Kenya and Ethiopia. Our Lady Queen of Peace Parish lies in a no-man's land between two hostile pastoralist communities: the Kenyan Turkana and the predominantly Ethiopian Daasanach. The neighbors constantly compete for grazing land and water for the herds, and their rivalry often becomes combat. In 2011, an attack on the village in which the parish church is located left 40 dead and 2000 displaced. In the last decade, violence on a smaller scale has continued.

Soon after the 2011 tragedy, the parish chose to move from the normalcy of conflict into the uncertainty of interethnic living. The hostile communities now bring their children together in the betwixt-and-between of an abnormal common school. Passing over the threshold of the school, the children, the future of the two communities, mix and become hard to tell apart. They often leave their mother tongues (Turkana and Daasananch) and their national languages (Swahili and Amharic) and converse in the liminal language of English. In the "pure possibility" of the school, the continuity of tradition becomes uncertain. Identities dissolve. A future once taken for granted is thrown in doubt. The mixing creates a fluid, malleable situation in which new friendships, expectations, customs, and institutions begin.