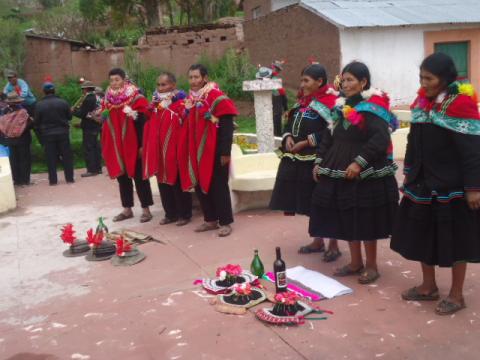 Maryknoll Sister Doreen Longres in Peru reflects on Jesus' call that we love one another.

When reading the rich passages for this Sunday’s Scripture the following messages jumped out at me:
•    No one is excluded, the Holy Spirit comes to all.
•    Jesus loves us as his Father loves him.
•    Jesus chooses us as friends and shares all with us. “I choose to tell you everything”
•    “Love one another”

Within all of these messages, I would like to explore the concept of love.

Love is a very common word, used in a myriad of ways, often at times bringing up images of the warm and fuzzy. But Jesus’ message about love is a strong one. It challenges us to look within ourselves and all around us to see how we are living this out TODAY, beyond our usual interpretations.

Love is patient, love is kind, as expressed by St. Paul, but also, here in Peru, love is courageous and wears a strong face willing to sacrifice and work toward a more just society characterized by life in abundance for all.

It is impossible to love your neighbor without relating to, being in solidarity with, and contributing to, your neighbor’s wellbeing. Love cannot remain indifferent within an impersonal analysis.

A multitude of migrants from Columbia, Venezuela, the Dominican Republic, and Cuba pass through the border town of Tacna in Peru on their way to Chile. Some end up staying in Tacna and attempt to make a new life here. There is a shelter for migrants where they can safely stay while working on their necessary papers. Yet prejudice is common in Tacna, one group may be labeled as thieves, another as drug abusers, etc. Yet we know that Jesus made it clear in his life that he saw the person, not the category in which the person had been placed. Jesus saw each one as his brother or sister. He loved them and wanted the best for them. No one was excluded.

Here in Tacna, working with the diocese, we welcome the migrant and the refugee who is looking for a better life away from violence, street gangs, and poverty. I and others have been touched by their stories of fleeing dangerous situations, leaving mother, father, and other family as well as their own country. We sponsor talks and workshops to educate the public about to the plight of the migrant, and we celebrate their presence through special activities, liturgies, and an occasional fundraising activity such as a barbecue.

“Love one another” and “love your neighbor as yourself.” Pope Francis’ rich encyclical, Laudato Si’, challenges us to expand our understanding of neighbor, and expand our understanding of the call to love. We are asked not only to love one another, but also to love, honor and protect all of creation. The pope calls us to care for and love Earth, our common home. Numerous times, he emphasizes that all of creation is connected – a concept that is widely supported by scientific evidence. Yes, we humans are made from stardust! Yes, everything is connected.

Love, then, is expressed in many ways. Here in Peru, love is expressed by honoring and caring for “Pachamama.” Pachamama is a word from the Aymara and Quechua languages which means “Mother Earth.” This love is manifested in ceremonies of gratitude for and celebration of earth’s gifts throughout the year and in sustainable land care. For many, it is the motivation that underlies the protests concerning the contamination and destruction of Earth and her gifts, through mining, deforestation, and careless exploitation of resources effecting neighborhoods and communities throughout the country. My own connection with nature has been fostered by my living among the Aymara in Peru in my early years.

I lived in a poor area in the southern cone of Lima, the capital. A neighbor of mine, a single mother, told me that when she is feeling down, she works in her garden in the front of her house. Although she migrated to the city from the central highlands of Peru, she has never lost her connection to the land and to Earth which sustains and nourishes her. Her garden, far from being an elegant place, is a make-shift fenced-in patch of dirt in the middle of a divided road covered with rock, debris and garbage. Yet it gives life.

Many in the city, as well as in Tacna, have lost or forgotten their connection to earth. Today we are called to rediscover this connection. Pope Francis calls us to conversion and to an integral ecology.

When Pope Francis recently visited the Amazon region of Peru, he said the cosmic vision and wisdom of the indigenous peoples have much to teach those of us who are not part of their culture. How can we recuperate and foster this connection?

Small efforts give hope: High schools here in Tacna foster environmental practices through projects; the local government incentivizes recycling in outlying zones of the city; and parish and church groups are studying the teachings in Laudato Si’.

Solidarity is an expression of love here in Peru. Love is to be in solidarity in an active way with those who are struggling, suffering and excluded. In an earlier time of violence in Peru, after a bomb went off in an upscale neighborhood of Lima, people from the poor town of Villa El Salvador marched into the upscale neighborhood to show their solidarity with the people there. Now, farmers in a nearby city are embarking on an 18-mile march with other farmers to protest the mine contaminating the river, which is their only water source.

Love. In Peru it is called solidarity, justice, being neighbor in a concrete way, honoring, loving and protecting Mother Earth. We can do things out of duty and obligation, but when we do it out of love, it is transformative!

Paleontologist, geologist and mystic Jesuit Pierre Teilhard de Chardin knew this when he said, “Some day, after we have mastered the wind, the waves, the tides, and gravity, we shall harness for God the energies of Love.” Peruvian poet César Abraham Vallejo Mendoza also knew love is solidary. His poem “Masa” (Spanish for “Mass”) is worth looking up on the internet.

Jesus says he calls us friends instead of servants and he chooses to tell us everything so that our joy may be complete. “This is my commandment,” he says, “that you love one another as I have loved you.”

Photo: The Chaqra Mayors Authorities performing the Pachamama ritual at the carnival celebration in the district of Orurillo Peru, in 2016. Photo by Bernardo Valentin and availabe via Wikimedia Commons.