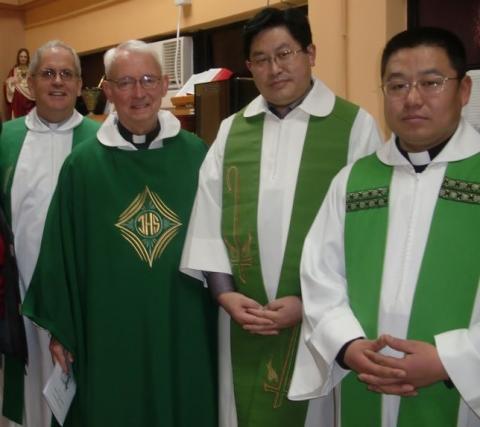 “Always be ready to give an explanation to anyone who asks you for a reason for your hope, but do it with gentleness and reverence, keeping your conscience clear.”  (1 Peter 3:16)

After the United States and China established full diplomatic relations in 1979, Maryknoll Father Elmer Wurth and I, both Mandarin speakers, moved to Hong Kong to take up liaison work with the Catholic Church in China. In the following years, we were able to visit mainland China many times, but we always thought: Wouldn’t it be nice to live in mainland China, to really experience the life of the ordinary people there?

I finally got my chance in September 1989. I had applied through a recruitment organization to work as an English teacher at the college level for the 1989-90 academic year. I let them choose the school.

As it turned out, I was assigned to a College of Chinese Medicine in the city of Changsha, in Hunan Province. The Chinese students were receptive and eager to learn. Of course, we could not teach religion during class time, but we could answer questions about it outside of class.

One day on campus, outside of the classroom, a student asked me if I believed in a religion. I replied, “Yes, I am a Christian, more specifically, a Catholic Christian.” “Then you believe in God,” he said. “Yes, what do you think of that?” I answered. He said: “Then you are a slave of God, you have to do everything that God tells you to do.”

“No,” I answered, “I don’t think I am a slave of God. I believe that I am a cooperator with God. The Bible says that God created men and women ‘in his own image and likeness (Gen. 1: 27-28).’ And God created the world, so I cooperate with God to make a better world.”

I added: “Maybe you have trouble understanding how a person can come to belief in God. Well, I believe that God gave us a revelation; He told us about Himself. That’s in the Bible. I read the Bible and said to myself: ‘I can accept this; I can believe this.’ That’s faith. Faith is not against reason. One can rationally accept God’s revelation, and come to faith in Him.”

I don’t know if I convinced my student that it is reasonable to have a religious faith, but at least I was fulfilling the instruction of St. Peter in today’s second reading: “Always be prepared to give an explanation if someone asks you the reason for the hope that is within you.”

As luck would have it, in 1992, I got a second chance “to explain the reason for the hope that was within me” at a summer English-language school for doctors and nurses in Wuhan, Hubei Province.

This six-week summer school was for doctors and nurses who plan to study in the U.S. One day, the class asked me if I could tell them something about the Bible. Right away, I answered that we are not allowed to teach religion in the classroom. However, the students had a good answer. They said: “We have a chance to study in the U.S. and we know that the Bible influences U.S. culture. How will we understand the people if we do not know anything about the Bible?

I replied, “Okay, I will not be teaching religion in class but I will introduce the Bible as a cultural tool, so that you can understand something about the culture of the United States.” I spent the next two hours explaining the Bible, both the Old Testament and the New Testament – the creation story in Genesis and its possible conflict with science (I think I even mentioned the Epic of Gilgamesh). The students were fascinated.

Again, I don’t know what those doctors and nurses thought about Christianity after listening to my lecture, but my feeling is best expressed by the passage in the first reading at Christmas Night Mass: “The people who walked in darkness have seen a great light; upon those who dwelt in the land of gloom a light has shone.” (Isaiah 9:1)

I shared with them “the reason for the hope that was within me.” If we do likewise, our own faith will grow.

Photo: Maryknoll Father Peter Barry (second from left) concelebrates Mass in Hong Kong on the occasion of his 72nd birthday on February 13, 2011, with Maryknoll Father Brian Barrons (left) of Jilin, China, and Fathers Li and Bai (third and fourth on right) of the Diocese of Jilin. Father Barry taught Fathers Li and Bai when they were seminarians. Photo courtesy of Brian Barrons, M.M