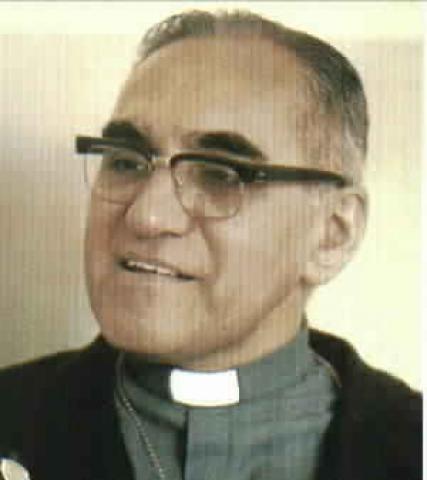 In May 1977 Bishop Oscar Romero celebrated the Sunday liturgy that we use today. He began by asking God to help us celebrate our joy in the resurrection and to express in our lives the love we celebrate. Beginning his homily he said that to hear the words of today’s readings was like a gentle rain, like something sweet that came down directly from God in that historical moment so filled with storms.

The events he described reminded us that the cross is still present even when we celebrate the resurrection, that Easter joy and the indwelling of God and the Lamb come to us even when there is violence and division. Bishop Romero lamented that in the previous two months two priests had been shot dead amid a climate where the archdiocese and its clergy had been targets of organized defamation and false accusations. One slogan that was posted around a well-to-do neighborhood stated: Be patriotic; Kill a priest.

Just four days earlier Bishop Romero celebrated the Mass of Christian Burial for Father Alfonso Navarro. He opened his homily with this story:

There was a caravan led by a Bedouin in the desert. Desperate and thirsty, they sought water in the false mirages of the desert. But the guide told them, “Not that way; this way.” After this was repeated several times, those of the caravan had had enough and took out a gun and shot the guide who while he lay dying extended his hand saying, “Not that way; this way.” And that is how he died, pointing the way.

Bishop Romero remarked: this legend has become a reality; a priest cut down by bullets dies forgiving those who shot him; dies praying. This is the message that we want to take from all this.

In the words and actions of this dying priest Bishop Romero found a deep faith in the resurrection and the life giving presence of God and the Lamb. Amid the profound sorrow before this horrific killing came a sense of great consolation and admiration for the gesture of forgiving the assassins and the ability to turn to God in prayer in the moment of death. Father Alfonso’s death had showed us the way that Jesus had taught us, the way to overcome violence and division.

These priests and later Bishop Romero himself and all the martyrs of El Salvador, men and women, young and old, from the countryside and from the cities, held firm in their commitment to, as John’s gospel says, “keep Jesus’ word,” in spite of the consequences. They continued to feed the hungry, visit the sick, cloth the naked, comfort the sorrowful, be a voice to the voiceless, call for peaceful, nonviolent conflict resolution. They carried out Jesus’ mission to bring the gospel to the poor in word and in deed and are a great example for us today.

At this critical time in history we need to work so that Jesus’ farewell gift of peace fills our lives, the lives of those around us and the lives of all peoples. Here in El Salvador the most vulnerable are those whose lives are in jeopardy because of citizen insecurity caused by gang violence and drug trafficking, because of the lack of basic needs like food and potable water, because of the lack of health care and measures that can prevent illness and disease.

One of our greatest needs is for a peaceful and just solution of the crisis of potable water. The government is defending itself from the claim of a mining company, Pacific Rim, which demands $300 million because it can’t mine for gold. In an unprecedented show of unity, the Catholic bishops of El Salvador called for a prohibition of this form of mining because it jeopardizes the very limited sources of potable water. Their concern is for the health and the very life of the people.

To attain solutions to these grave problems we must learn from the crisis in the early church which was resolved because both sides were open to dialogue. Both the church leadership and those affected were open to listen and committed to a peaceful outcome. They were open to the Spirit of the risen Jesus who maintained essential unity while impelling the church to adapt to new realities and bring the gospel to the ends of the earth. This problem solving method can be useful today both in the Christian community and in the larger world.