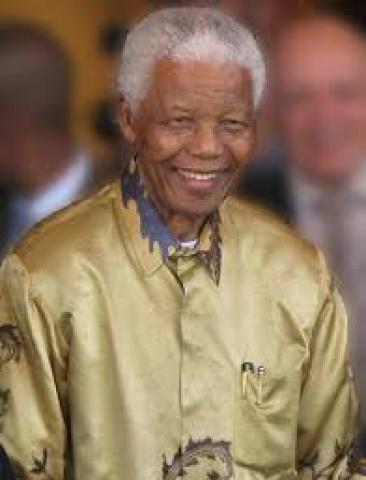 "You have heard that it was said: Love your neighbor and hate your enemy. But I say to you, Love your enemies and pray for those who persecute you, so that you may be children of your Father in Heaven.” (Matthew 5:43-44)

The world recently mourned the death of Nelson Mandela, the first democratically elected president of a multi-racial South Africa. At his memorial service and funeral, speaker after speaker praised this incredible leader, not just for his wisdom and intelligence, but even more for his ability to unite a deeply divided country by promoting forgiveness and reconciliation between those who formerly regarded each other as “enemies."

Mandela, affectionately known by his clan name Madiba, was arrested and imprisoned for 27 years for opposing the apartheid policies of that time that segregated people and denied them basic rights merely because of the color of their skin. When he emerged from prison he not only made peace with those who had been responsible for those policies and who benefitted from them, but he also included them in his government, creating a “rainbow nation” of people of all races that was a model of reconciliation for the world.

Madiba gave us a living example of the lessons of today’s readings. In Leviticus we are told not to seek revenge or to nurture a grudge but to love our neighbor as we love ourselves. Psalm 103 reminds us that God is gracious and merciful, forgiving us rather than punishing us for our sins. The message is that we should do likewise. In 1 Corinthians we are given the reason why an attitude of forgiveness is so essential when we are told that every person is God’s temple, a dwelling place for God’s Spirit. How can we be at war with each other, if we believe these words?

Finally, today’s Gospel reading offers a huge challenge – “Love your enemies and pray for those who persecute you….”

We might wonder if this is humanly possible. Each day there seems to be a new conflict between people who differ from one another – Christian against Muslim, Sufi again Shia Muslim, Jew against Arab, Protestant against Catholic. We only need witness the gridlock in the United States Congress to know that the divisions extend between one political party and another.

Yet Nelson Mandela shows us that it is possible to reach out to those who differ from us and in reaching out, to liberate us both. In his autobiography, Long Walk to Freedom, Mandela shares the thinking behind his remarkable ability to unite former enemies. He writes:

What an astounding insight into human behavior and into the way to heal divisions that have lasted for centuries! I witnessed the truth of this insight when I served as an observer at the historic 1994 elections in South Africa that brought Mandela to power. I was stationed with three other observers in the hotly contested area of Kwa-Zulu Natal on the northeast corner of the country. Mandela was scheduled to address a rally there in the run-up to the elections but violence was threatened by the rival Inkatha Freedom Party against those who dared to attend.

A delegation of local African leaders approached our monitoring team a few days before the scheduled rally and made a totally unexpected request. “Go to the army headquarters in the Zulu capital and ask for protection for the people who attend the rally,” they said.

We were dismayed and astounded. This was the enemy we were being asked to approach – the apartheid army that often fired on civilians and killed women and children indiscriminately. Yet how could we refuse this request. In trepidation we went to the base and asked to see the commanders. A few moments later several officers in full uniform came to the entrance to hear what we wanted.

They were as surprised as we were by the request. After conferring with one another, they agreed to come to the rally and do their best to prevent violence. Then they invited us into their dining hall and shared their own hopes and fears for the future. They realized that they were on the losing side of a long-standing conflict and wanted to believe Madiba’s offer of reconciliation. We had not expected such an admission from these guardians of an unjust policy. They opened our eyes to see the common humanity – the Spirit dwelling within – that is in every person. They seemed to know that they were also prisoners.

That Sunday, army tanks flying white flags surrounded the stadium as hundreds of people came from all directions to hear and see the fabled Mandela for the first time. It was a peaceful and exhilarating experience. We stood by smiling and waving as soldiers wearing white armbands accompanied the African people back to their homes.

This same spirit of peace and helpfulness prevailed at the elections the following week. Thousands of people of all races waited for hours in the hot sun to vote, most of them for the first time in their lives. The police and army did not interfere but were nearby to assist those who needed help, passing out water and refreshments. Bishop Desmond Tutu referred to these elections as more than just a secular political event, declaring: “Yes, our first election turned out to be a deeply spiritual event, a religious experience, a transfiguration experience, a mountaintop experience. We had won a spectacular victory over injustice, oppression and evil…here we were becoming, from all the different tribes and languages, diverse cultures, and faith, so utterly improbably, we were becoming one nation.”[2]

I felt as if I were witnessing a miracle. One man’s belief in the goodness of all people spread throughout the entire nation, turning a potential bloodbath into a symbol of transformation. After these elections, Bishop Tutu proclaimed: “There is no such thing as a totally hopeless case. Our God is an expert at dealing with chaos, with brokenness, with all the worst we can imagine…. Indeed, God is transforming the world now – through us – because God loves us.”[3]

This is indeed the power of transfiguration; this is a power that comes from forgiving one’s enemy and from loving others as one loves oneself. This power liberated a nation. It can liberate each of us as well.