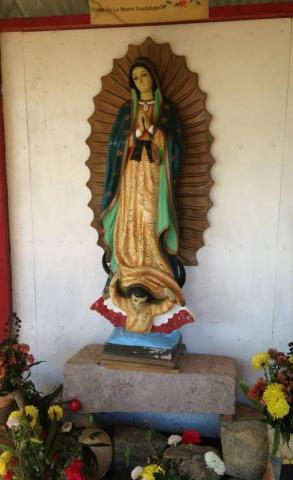 Kathleen Kollman Birch is the Communications Manager at the Maryknoll Office for Global Concerns.

Several years ago I spent a few months living and working at the Houston Catholic Worker, a shelter for undocumented immigrants and their families. I lived in the women’s house, which housed about 30 women and children who had come to the U.S. from all over the world – Cuba, Honduras, Eritrea, Nigeria, etc.

Many were asylum seekers who had crossed the border and been detained and then released to await their asylum hearings. Nearly all of them had arrived at our front door with nothing, only the clothes they were wearing and perhaps some mementos from their former lives. Some would stay for weeks; others for many months.

My interactions with them would at first be purely functional, offering them a room and explaining the house rules. But eventually fragments of their stories would spill out over shared meals and house responsibilities.

One day, in the supply room where we kept donated clothes, a woman picked up a child’s shoe from the floor and turned it over in her hands. Since she had not come with a child, I asked her what she wanted with it. She replied, tearfully, that she had left a small daughter behind in Cuba, whose size that shoe was. I stood with her while she cried and eventually composed herself. She’d bring her daughter over soon, she said.

On our way to her doctor’s appointment, a pregnant Nigerian house resident admitted to me that she herself had been a doctor in Nigeria. I asked her whether she hoped to practice medicine in the United States. She replied, “Perhaps someday,” but explained that it would be very difficult to get re-qualified here. I later learned that she had come to the United States fleeing threats from Boko Haram.

Today’s gospel reading relates a few of Jesus’s parables about the call to give up everything to gain the Kingdom of God. First we hear the parable of the man who finds treasure in a field and sells all he has to gain it; then the image of the “pearl of great price,” worth selling everything one owns to possess; and finally the image of a net of fish that collects both good and bad catches, but in the end, only the good are kept.

These parables make me ask myself what it would look like for me to give up everything – my home, my identity, my language, my loved ones – for the sake of the Kingdom of God. It is difficult to even imagine. I could only imagine making such a choice with the greatest humility and trust.

The women with whom I lived at the shelter may not have given up everything explicitly for the Kingdom, per se, but many had made the choice to come to the United States out of true selflessness, in that they were taking on great personal risk to better the lives of their loved ones. Many did express to me that they had made the choice to leave everything behind and come here out of trust in God’s providence. They arrived in this country friendless, unknown, with no resources – only hoping that they might live on and live more fully than they had under conditions of violence and oppression. They gave everything for this one chance.

I see these women’s choices and circumstances as bearing witness to just how radical the choice to choose God’s Kingdom is. They modeled for me what it looks like to give up everything, the total vulnerability it requires.

While each of us is not not necessarily called to give up everything we have right at this moment, we know that that at the end of our lives we will be, and that we are called to approach life with “open hands,” progressively letting go of what we cling to other than God. Eventually, we will each stand before God empty-handed – as these women were when they arrived at the door of our shelter. What we will be seeking is rest, total fulfillment in God’s perfect mercy and love, the pearl of great price.

While we journey through this life, may we show others a reflection of that mercy that we hope to receive.