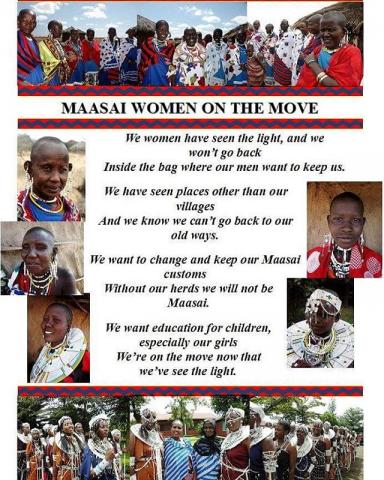 We women have seen the light and we won’t go back inside the bag where our men want to keep us.

We want education for children especially our girls. We’re on the move now that we’ve seen the light.

– "Maasai Women on the Move" by Tereno, a Maasai woman from Loleera Village. Translated from Maa to Swahili to English by Maryknoll Sister Sue Rech.

The readings for today are a journey of discovery for the disciples and for Samuel. It is a narrative that talks about their missions as assisted by Eli and John the Baptist. They allowed themselves to be open to the things that would unfold before them as they follow the call to discipleship.

Andrew, Peter, and the unnamed apostle remind me of the young women I accompany here in Arusha, Tanzania. The women, like the apostles, heard, followed, saw, asked, stayed, and in the end, proclaimed and invited others. Just like what Jesus offered to his followers, education allows these young women to see a light and realize that they are capable of moving beyond their means and increasing the wealth and stability of their families. They bravely go against what is expected of them, to remain uneducated, to marry at a young age and begin having children. They take what they have learned and experienced and spread the message of empowerment throughout their communities. They become changemakers.

The invitation to “come and see” in John’s Gospel, combined with the openness and eagerness of Samuel, best describe the girls from the pastoralist and hunter-gather tribes of Maasai, Wataturo, Barbaig and Hadzabe who come to our center for education. When they leave their villages, all they know that they are going to attend secondary school. What they cannot image is the discovery of their worth and potential as individuals. Despite uncertainty and pressure, these young women gain determination to create a better future for themselves and their families.

Chemsha Bongo (the Swahili word for crossword puzzles, literally means “boil brains” but chemsha also means challenge and compete) are my way of accompanying the girls both inside and outside the classroom. In a culture that does not value education for girls and has no room for questions about the whys and hows of things, I offer these young women an opportunity to do something counter-cultural: to practice critical thinking. I try not to directly answer their questions. I offer situations and further questions for their independent reflection. I also try to offer experiential encounters on the different lessons and activities. I want to stimulate all their five senses in their learning so they develop creative and critical thinking. Jesus offered the same experience to the apostles. He did not directly answer their questions but instead invited and allowed them to see for themselves. Such learning fosters a deeper understanding and appreciation of what is before them.

Offering options in life through education gives the girls the dignity they deserve. Providing them opportunities to expand their horizons gives them a better perspective on how they can balance their rich heritage and globalization. The effects of education wash over not only the young women but also their families and communities. Seeing these girls empowered by education is the strongest influence for positive change on a culture where a woman’s voice is often not heard. The young women become spokespersons on behalf of their pastoralist and hunter-gatherer communities which are often marginalized due to their lifestyle and illiteracy. I hope the challenges and triumphs they encounter will empower them not just to survive but to thrive.

The center where I work is called Emusoi. Maryknoll Sister Mary Vertucci chose the Maasai word for the name when she founded the center because it is means awareness, realization and discovery. This is Sister Mary’s hope and invitation to all the young women who come to the center: to discover and become aware of the nuances of something good in ourselves.

We have seen the light of education and can never go back. May our intimate relationship with our God sustain our openness and eagerness to heed Jesus’ invitation to us all: to come and see.

Image: Shared on Instagram by the Emusoi Center in Arusha, Tanzania, on December 12, 2017 at Instagram handle @emusoicentre.