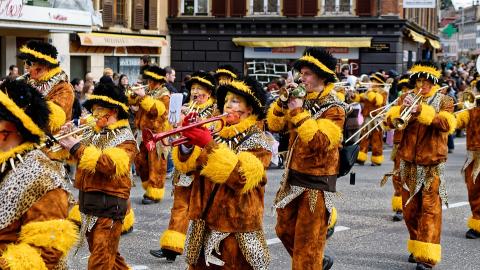 Here in Bolivia as in many other Latin American, countries Carnaval or what we in the U.S. commonly call Mardi Gras (Fat Tuesday) are important celebrations as a prelude to the beginning of Lent. The most well-known of these celebrations, in Rio de Janeiro, Brazil and New Orleans, exhibit extravagant displays of costumes, musical and samba dance groups, and endless parades through those cities that abruptly end on Ash Wednesday morning to mark the beginning of the 40 days of Lent.

Not so here in Bolivia, where the Carnaval celebrations go on for a couple of more weeks into the middle of the Lenten season, with just as much extravagance but with smaller observances in the countryside villages that mark a special time in the ritual agricultural cycle of this Andean country. In the cosmology of the indigenous Aymara and Quechua peoples of Peru and Bolivia, Carnaval, like Lent, is a time of cosmic and religious renewal so this coincidence makes perfect sense for missioners like us who have lived so long here and identify so closely with the people of these lands. What might seem like excessive celebration in the midst of so much poverty to the people here lavish celebrations are necessary to show gratitude for a hoped for bountiful harvest and blessings received no matter how small they may be.

One should not rush to judgment when we stop to reflect on the deeper meaning of Lent. This season is about more than mere adherence to a set of beliefs or ritual practices. Today´s Gospel reading from Mark recalls the Transfiguration scene of the encounter of Jesus with his apostles on top of Mount Tabor. Here Jesus stops to reveal the real meaning of his call, life and mission in calling Peter, John and James to be attentive disciples in following and applying his message in continuing his message when they come down from the mountain top.

Peter’s reaction is to remain there in that serene place expressed in his words, “how good it is that we are here” only to suffer a mild but firm rebuke from Jesus to land back in the reality of the suffering and cross so necessary to enjoy the glory that is to come after the Resurrection. According to the well-known Spanish scripture scholar, José Antonio Pagola, the decisive message of the Transfiguration is to listen attentively to Jesus’ words and to apply them in creating the kinds of right relationships that build communities in the here and now. Carnaval celebrations in their full splendor carry that same message about building and the renewal of our relationships in with God, each other and the entire Creation.

Peter’s mistaken attitude is one of exclusion, wanting to hoard the presence of Jesus for a select group of his immediate followers. Pope Francis in his Lenten message this year warns against this kind of exclusivity in our relationships. In the change of heart or the conversion that is the underlying challenge of Lent the Holy Father warns against the temptation to indifference or what he calls “the globalization of indifference,” the “vertigo or downward spiral of indifference” that afflicts so many in our world today in the face of scandalous poverty and conflicts, human trafficking and environmental disasters. One can easily shrug one’s shoulders out of helplessness or worse, turning away in indifference by choosing instead a commitment to a conscious process of forming our hearts in the practice of generosity, mercy and constant vigilance.

That Carnaval should go on beyond Ash Wednesday should not be of concern to us so much as the situations in the world that cause us to turn away in indifference from the needs of our brothers and sisters. The real renewal of the Lenten Season is found in the building and celebration of restored relationships.

For me one of the most moving and significant moments in the Carnaval celebrations takes place every year in the mining town of Oruro, Bolivia – which sits at near 13,000 feet altitude -- at dawn of the most celebrated of the many days of Carnaval. In the town’s central plaza thousands of people gather while numerous bands play at the same time as if in a symphony. Strangers and friends alike meet to embrace and greet the rising son from behind the mountains in a splendorous display of the renewal of the unity of the human spirit. That is what Lent is all about, to be thrust into a kind of “vertigo” of the difference we can all make!