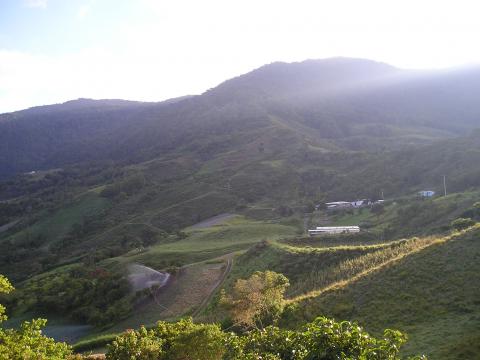 In the year 2000 Pope John Paul II – canonized today, along with Pope John XXIII – instituted a new feast, the Feast of Divine Mercy, celebrated for the first time in 2001 on the second Sunday of Easter. The message and devotion of the Divine Mercy is based on the apparitions of Jesus to St. Maria Faustina in Poland beginning in 1931. According to the diary of St. Faustina, Jesus spoke to her saying, “Paint an image according to the pattern you see, with the inscription: Jesus, I trust in You.” And for St. Faustina, the image she felt inspired to create reflects the colors of God’s energy of love, emanating in beams of light from Jesus. One ray of light is pale, which represents the water which cleanses; and one ray of light is red, which represents the blood that gives life to creation. For St. Faustina it was clear: God invites all of creation to love and intimacy, to right relationship, and cleanses with mercy all who upon their journey open their hearts to God’s love, asking for forgiveness and for the graces to practice reconciliation.

It is sometimes difficult for us in our faith journey to understand fully what is meant by mercy. In our human condition which is so often filled with distraction, fear, confusion and brokenness, it’s much easier to recognize mercy when we see it in action than it is to define it in words. In light of this reality, I wish to share a true story of mercy.

Last year I participated in a pilgrimage/retreat that meditated upon the stories and witness of the martyrs of Central America. During the civil wars that raged and ravaged these countries during the 1970s and 1980s, almost 500,000 children, women and men were murdered, many of them holy women and men parish catechists who gave their lives for love and discipleship. In one instance (all names and places are changed to protect and honor the survivors), Divine Mercy emerges, as follows:

Fr. Bill, a priest from the U.S. was serving as pastor in a mountain region of Central America in the early 1980s, during one of the most violent periods of the civil wars. One night the army came for the parish catechist, Diego, with whom Fr. Bill had grown quite close. Diego was taken from his home and family and beaten, tortured, and executed. His broken body was left in a field near the village. A few days after Diego’s abduction and murder, Fr. Bill was sitting outside on the steps of the village church just after celebrating morning Mass. The oldest parishioner, Magdalena, was sitting next to him. She had suffered many losses during the war, with most of her family also killed by the army. As they were sitting quietly grieving, an army patrol slowly passed by. Fr. Bill felt an intense rage burning within him as the soldiers walked by brandishing their rifles and machetes. He was remembering the names and faces of the many parishioners who had suffered death and torture during this war, and was especially remembering his friend Diego. Magdalena could see the rage in his eyes, and turned to him, saying, “Father, if one of these soldiers comes over to you and asks for a drink of water, you must give it to him, for after all, he is our brother too.” Fr. Bill became overcome with grief and guilt upon hearing her words, and was humbled by her witness of love and mercy. As he shared this story with us during our retreat, his grief and love for the people emerged most palpably. It was a powerful moment of solidarity and witness.

I carried this story with me as I journeyed back to the U.S. A few days after my return I resumed my weekend teaching duties at a local Catholic college, lecturing about pastoral counseling techniques and the challenge to be non-judgmental when listening to others. I decided during my presentation to share a modified version of Fr. Bill’s story, as a good example to make my point. I did not say where or when the story took place.

During the class break a man approached me and asked if he could speak to me. He stated that he was touched by my story, and further, that he knew where and when the story took place. I asked him how he could possibly know this, as I did not give enough detail to make time and place clear in the story. He then said: “I know this happened in Central America during the civil wars because during that period I was a U.S. Army Ranger, and an instructor at Ft. Benning, in the School of the Americas, and I taught those soldiers how to beat, rape, torture and execute their own people. And I haven’t been able to live a normal life in the 30-plus years since that time.” He then fell into my arms weeping, asking for forgiveness.

In that one gesture of unconditional kindness, effusive love, and forgiveness, we saw what the elusive word “mercy” looks like when Magdalena practiced it in real life. And in the second encounter, so many years later, a human person created in the image and likeness of God shares the painful consequences of his brokenness and asks for mercy. As Archbishop Romero said, and the many martyrs of Central America witnessed, “Let my blood be a seed of freedom.” The Central American martyrs practiced mercy by their witness of love and forgiveness, and shed their blood amidst constant prophetic calls for peace and reconciliation.

The message that Jesus gave to St. Faustina is one of complete love and mercy for those who have lost their way, and for every person who takes the risk and opens their heart to God’s love and mercy. Jesus said to St. Faustina, “My mercy is greater than your sins and those of the entire world.”

The Divine Mercy devotion has been given to us in these times to help us realize that Jesus will forgive us always, but we need to consciously cooperate and accept the offer. We receive God’s mercy from Jesus’ wounded side. As Pope Francis says, “Those who live with mercy do not fear death, because they face it directly in the wounds of their brothers and sisters, and overcome it with Jesus Christ’s love.” From the wounds of Christ flow the rays of red and white, which cleanse us all from our brokenness and give us a transfusion of renewed life.

In my own life I have so often seen the mercy and the patience of God. I have also seen so many people find the courage to enter the wounds of Jesus by saying to God: Lord, I am here, accept my poverty, hide my sin in your wounds, and wash it away with your blood. And this is exactly what God’s energy of love does: God accepts, God offers consolation, God cleanses, and God loves unconditionally. The soldier I encountered in class witnessed this process by taking the risk and telling me his story.

The Easter message is clear: our Messiah defeats the powers of the world not by fighting them on their own terms, but by absorbing them with Divine Mercy; taking all the aggression they could muster and then swallowing them up in God’s unconditional and unending mercy and love.

In the cross of Jesus there is judgment; on the false shepherds of the people and on the occupying powers that continue to overwhelm humanity, refuse to appropriately share in a balanced way our material resources, and recklessly damage the ecology of our earth. These powers are defeated with the weapons of love, compassion, forgiveness, and nonviolence. Divine Mercy is the outpouring energy of our suffering Messiah. This is God’s way of battling injustice. Our world is transformed through the power of suffering love and mercy.

The challenge before us today and every day is to embrace in our hearts and our actions that simple and powerful invitation of our God: to trust, to receive God’s mercy, and to let it flow to others. “Jesus, I trust in You.” Divine Mercy is open to all of us. Let us be ministers of God’s Divine Mercy to each other as we work for peace and justice in our broken world!