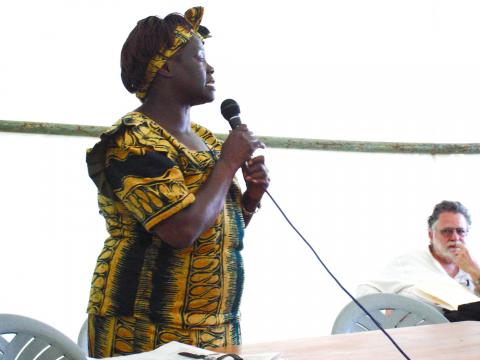 The first verse of today’s gospel – the opening verse of Mark’s gospel – proclaims that Jesus is the anointed Messiah and the Son of God. The latter title could be used in the first century only for the Roman Emperor, the son of the divine Augustus. The Messiah was the one expected to liberate the Jewish nation from Roman imperial rule. Thus, this verse describes Jesus as a threat to the political order.

John the Baptist is presented as an Elijah figure, as characterized by his clothing and sparse desert diet. The prophet Malachi (4:5) had predicted that Elijah would appear before the great and terrible day of the Lord. Just as Elijah pronounced judgement on the court of King Ahab in the First Book of Kings (Chapter 21), so John the Baptist, according to the First Century Jewish historian Josephus, was perceived by the Herodian court as a subversive threat.

Similar events have happened in the modern world. One such confrontation happened in Kenya in 1989, when Wangari Muta Maathai, a woman dedicated to conserving the environment, registered opposition to government plans to expropriate close to half of Uhuru Park, the only park for ordinary residents of the densely populated city of Nairobi, in order to build a 60-story office building for the ruling KANU Party, a 2,000 car parking facility and other developments. As a long-time environmentalist, Maathai organized protests against this development and sent letters to local and international politicians and heads of influential governmental and non-governmental organizations.

Even as a young girl in central Kenya in the 1940s, Maathai loved doing farm work, even thrusting her hands into the fertile dirt of their family homestead. She relished the clean streams that, protected by indigenous baobab trees, provided safe water for the family and gave life to  many species such as frogs and salamanders. When the indigenous trees were cut down in order plant coffee and eucalyptus trees – purportedly for economic development – she discovered that the waters dried up and the variety of living organisms dependent on the streams disappeared.

As a result she made conservation the hallmark of her life, earning advanced degrees in Biology and Veterinary Science. In 1982 she founded the Green Belt Movement, an organization of women that planted millions of indigenous trees in Kenya and became a model for similar organizations throughout sub-Saharan Africa, whose tree-planting and other conservation actions have helped halt desertification and preserve sources of clean water.

In response to Maathai’s principled opposition to destruction of a city park, the government of autocratic President Daniel Arap Moi called her “a crazy woman,” and he was joined by a chorus of sycophantic cabinet ministers and parliamentarians, almost all men, who castigated her as ignorant and her Green Belt Movement as a bunch of useless “divorcees.” In 1989, Kenya was still a one-party State and leaders of the government, in a very patriarchal society, could not brook any opposition to plans formulated by the Party in power – particularly from a woman who also happened to be a member of an ethnic group that would soon challenge Moi’s presidency. Not only was she verbally abused, but Maathai was jailed for several weeks.

However, Maathai’s courageous stance created international attention and the financiers from abroad withdrew their offers to fund the developments at Uhuru Park. Since then the park has been spared the threat of commercial development and the poor residents of Nairobi can enjoy one of the few green spaces in the vast urban sprawl.

The first verse of Mark states: “The Beginning of the Gospel of Jesus Christ.” The word for gospel – evangelion – meant an announcement of victory and was almost exclusively used by Roman messengers to announce a Roman military victory. (Good News; we won.) Mark turns this word on its head. The first verse of his gospel is a direct repudiation of the Roman Empire. Rome’s way is decidedly not God’s way, which is something new now being presented to Jesus’ followers. Following this way will put them in confrontation with the Roman Empire. We know from history that almost all of Jesus’ Apostles and many of his disciples were eventually martyred by Rome.

However, the announcement of Jesus’ coming is truly good news. Military empires come and go, whereas those who follow God’s way persevere throughout history and will in the end achieve the victory promised by God.

Photo: Wangari Maathai speaking at the World Social Forum in 2007, by "The-time-line" and available via wikimedia commons.