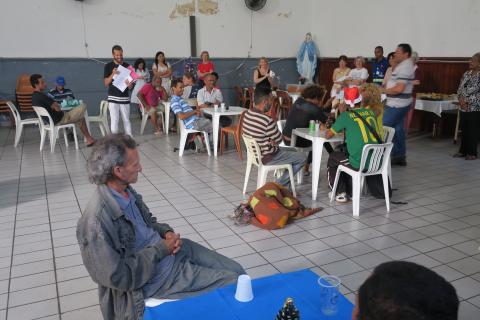 Marilyn Kott, a returned Lay Missioner who served in Brazil, reflects on what it means to live as one Body of Christ.

“As a body is one though it has many parts,…”

Roberto’s eyes lit up, and he pointed at his feet as he started to paraphrase this Scripture passage to his wife, Ana. “Every part of the body is important,” he said with enthusiasm. “The body isn’t just a heart, or a brain, or shoulders, or a back. It is everything…like St. Paul said…it is the ear, and the eye. It’s even this, the little toe!” he exclaimed, pointing at the smallest digit on his right foot, resting in his well-used flip flop. “The body is even the little toe.”

It was as enthusiastic and succinct a scripture commentary as I've ever heard, and by giving it, Roberto was showing acceptance of the answer I had just given him in response to the question, “Why are you here?” Roberto and Ana were a married couple, around age 60, who lived on the streets near the center of São Paulo city. And Jim and I were a married couple in our 50s, Lay Missioners from the U.S. helping at a very humble Monday morning ministry of coffee, bread, showers and welcome for people experiencing homelessness.

“…and all the parts of the body, though many, are one body,…”

Roberto wasn’t the first person, or the last, who ever asked me that question – "why are you here?" – during my time with Maryknoll in Brazil. Some people were fascinated that a person would leave behind life in the U.S. to be with the poor or incarcerated in a foreign country. I mean, aside from us having left everything familiar behind, weren’t there people in our own country to serve?

“Unity” was the one word answer I had given Roberto initially, and when he had continued to regard me quizzically, I referred to St. Paul’s First Letter to the Corinthians. “Although we are many and varied, we’re meant to be one in the Body of Christ. So, I come from my land to yours, to be united with you, in Christ.”

Roberto and Ana, and the others whom I met at the homeless ministry, many and varied that they were, helped me learn a lot about dignity, especially in difficult situations. The two of them arrived at our ministry in a slightly different condition every Monday morning. They might be a little tired or they might be upbeat. A little hungover, or just hungry and in need of a shower and some fresh clothes. They were generally participative, not there just to be physically refreshed, but also looking for community with the volunteers and the other street people in general – to be united in Christ.

About two years after I first met them, Ana’s health declined. She lost a lot of weight and she had sores. The physical consequences of the hard life that she and Roberto lived on the streets – with the alternating heat and cold, the rainy season, the pollution, illness, bugs and vermin, the alcohol – took their toll. She passed away within the next few months. Roberto kept coming to our ministry on Monday mornings and we talked about various things: day-to-day life, Ana, the weather, that day’s coffee. But that conversation about the different parts of Christ’s body, and especially the little toe, stuck with me particularly.

“…There are different kinds of spiritual gifts but the same Spirit;…”

In this Sunday’s readings for the great celebration of Pentecost, we read in the Acts of the Apostles about the descent of the Holy Spirit on the disciples. In St. Paul’s letter, we hear his insistence that each of us has a role to play in the Body of Christ. We wonder at the variety and purpose of God’s creatures in the responsorial psalm. And in the Gospel, we read of Jesus sharing his breath, and instruction, with the Apostles. These readings remind that each of us is a necessary part of the Body of Christ, and each of us has a role in building the Kingdom of God.

“…there are different forms of service but the same Lord;…”

For some, the role is crystal clear. Consider St. Paul and his dramatic conversion on the road to Damascus. Or the Virgin Mary, visited by the angel Gabriel. But God’s call is often much more subtle, akin to the "still, small voice" in the breeze that the prophet Elijah experienced (1 Kings 19: 11-13). And so it becomes important for us to be patient and keep our hearts open, knowing that the clues will come when and where the Lord wills them.

For me, Roberto – with his flip flops and little toe, willing to share Scripture with this foreigner while trying to get a bite to eat and take care of his wife – was one of God’s subtle clues. He was a manifestation of the Spirit given to me to indicate my role, my place, there in Brazil.

To each individual, the manifestation of the Spirit is given for some benefit. (1 Corinthians12:4-7)

1. Reflection: What part of the Body of Christ do you feel that you are? What special gift or gifts has He given you to employ? Whom does He expect you to serve? Lord, help me to recognize my role in Your Kingdom, and give me the wisdom and courage to go forward in your name.

2. Reflection: In his encyclical Laudato Si’, Pope Francis asks us to develop an integral ecology, one in which we are in right relationship with God, our human brothers and sisters, and our brothers and sisters in the rest of the natural world. If we consider the idea of being united in Christ with all creation, not just other humans, how does that change how we go about building up His Kingdom?  Lord, help me to recognize you in all of your Creation, for when you made it you “saw that it was very good.”  Help me to understand my role in caring for it, in your name.

Photo: Ministry for those on the streets of São Paulo, courtesy of Marilyn Kott.