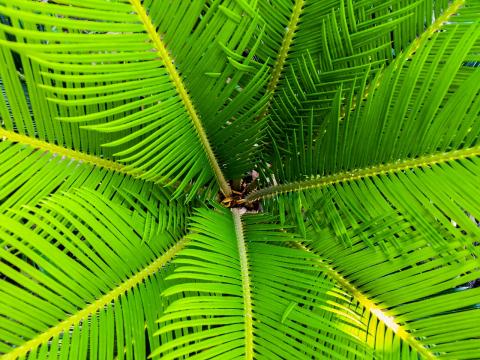 Marknoll Sister Marvie Misolas reflects on Jesus' example of courage and faithfulness to God’s call as a source of strength when we face doubt, fear, or even an imminent threat to life.

When Jesus told his disciples that he had decided to make the pilgrimage with them to Jerusalem to celebrate the Passover feast, the disciples were alarmed. Both the disciples and Jesus were well aware of the risk this posed. Jesus’ message of the reign of God at hand would upset the priests and leaders at the temple as well as the Roman authorities. Nevertheless, Jesus’ commitment to proclaim God’s love and justice was solid. Spanish New Testament scholar José Pagola says Jesus’ “awareness of the purpose of his existence for others constitutes his very being and his redemptive mission.”

Today’s gospel reading describes Jerusalem, the holy city, as full of thousands from Palestine and around the world who have come to celebrate the Passover. The Jews’ collective dream of liberation from the Roman Empire is gaining momentum and will soon be a sort of tipping point. They are reminded of their identity as the chosen people of God, however, they are oppressed in their own land.

Not far from the temple, the Roman soldiers are on the watch for any possible revolt. This is the religious and political backdrop to Jesus’ entry to Jerusalem. The prayers of the Jewish people during these days become an outcry. They are waiting for their Messiah. They see Jesus’ intention of riding a donkey as a symbolic act to proclaim God’s reign of peace and justice distinct from the ruthlessness and injustice of the Roman Empire. The people are jubilant with the prospect of God’s reign that Jesus had talked about so much. The Jews spontaneously praise Jesus in thanksgiving for his message and shout, “Hosanna! Blessed is the one who comes in the name of the Lord,” as they lay out their tunics and raise their branches as he passes and follow him.

The Palm Sunday readings remind us of the importance of courage and faithfulness to God’s call when we face doubt, fear or even an imminent threat to life. The intentionality of one’s prophetic act to proclaim God’s reign of peace and justice is not to be construed as mere idealism or even philanthropy; it is a conscious choice to face the consequences, even unto death.

Our Catholic faith tradition is not short of stories of people who remain committed until the end to making God’s reign of peace and justice realized. We can call on the names of the martyrs of El Salvador, Berta Caceres of Honduras, Leonard Co of the Philippines, and thousands of peace and nature defenders, both named and unnamed, some disappeared and murdered. We can also call on the names of women and men who take on personal risk by speaking out about sexual abuses committed by people in power. We can name indigenous communities and their leaders who have stood up against abuses of natural resources in their territories done in the name of sustainable development. Their stories continue to validate Jesus’ faithfulness to proclaiming God’s reign of love and justice.

The readings of today remind me of the story of a farmer leader with whom I collaborated on a seedling production project outside of the city of Manila, in the Philippines. Her husband had been killed by powerful politicians and yet she continued to speak out for justice. She receives numerous death threats from landlords she and other farmers accused in lawsuits of land grabbing. Despite the danger and fear she and her family experienced, she chooses to continue to defend her communities’ rights to the land. Her struggle is connected to the struggle of Jesus, to bring new life.

The focal point of Palm Sunday and the rest of Holy week is Jesus, whom Sr. Ilia Delio calls the “thisness of God.”

By his suffering and death, Jesus shows us the process of life. “Jesus’ death symbolizes his Yes to the consciousness of his unity to God (humanity) and God’s unconditional love (divinity). This is Jesus, the ‘thisness’ of God,” Delio wrote in Making All Things New: Catholicity, Cosmology, Consciousness (Orbis Books, 2015).

Beautifully, Delio summarized Jesus’ suffering and death: “Jesus’ mission of creative wholeness restores humanity to its integral nature within the whole of evolutionary nature. Through the life of Jesus, we can see ourselves as part of an ongoing process of creative and emergent life (evolution) and are called to realize our participation in this unfolding of life, as creation seeks its ultimate fulfillment in God. Death is not due to sin and evil, nor it is opposite of life. It is radical in nature, integral to life.”

These seeds sprouting into new plants represent resurrection. In the quantum understanding of life and death, Jesus’ resurrection empowers us to be like him, to be renewed. Through every big and small death we experience in this life, we emerge with a higher consciousness, a new whole sense of being. We emerge more loving. For Ilia Delio, “every act of physical death is an act of new life in the universe. The resurrection of Jesus reveals to us new cosmic life.” Our living on, in and through relationships, notes Delio, is the meaning and depth of the resurrection of Jesus. Jesus now lives on in the heart of the universe in a new relatedness. Jesus lives in us, those who follow him, who remember him, who extend our relationships with compassion, justice and peace.

Image: Branches of a palm tree by Pixabay/Josch13.