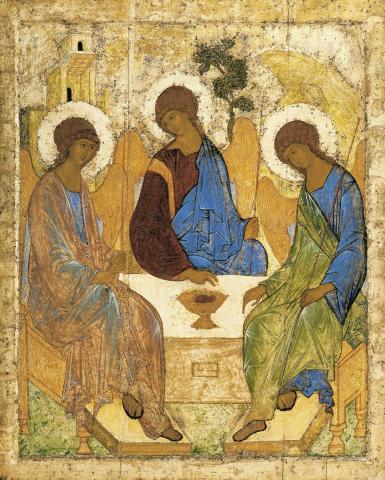 Nancy Bourassa, a Maryknoll Affiliate from Wisconsin, considers how the Triune God calls us to mission.

On Trinity Sunday, we focus on the completeness of God. There is nothing missing. No human or earthly need is left unfulfilled. Through creation, salvation and Christ as a guiding light, we have all we need to flourish in this life. The Scriptures provide the navigation plan; we have only to find our unique path and call for help to find our way while are on the journey.

I have a dear friend, a priest, who served in several mission sites near the Haitian border for 19 years. When asked why he rarely said "no" to the people of his parishes, he responded that he was and is a spritual father and that is what fathers do. He gave his time, his patience, his counsel, his means and the Eucharist to those in need around him. He helped to fill in the deep holes in their lives and gave hope to those living quite hopeless lives. He lived out his call to be Father.

In Hanoi, Vietnam, I was walking with another Maryknoll priest along the lake in a city park. He was telling me and my companions a story of the youth he found on the streets of the city. The youth explained to him that their family farms had been subdivided so many times that there was no land left for all of the children to farm. With only a rural education, they came to the city to find work and often ended up selling souvenirs to the tourists, which is against the law. Being caught meant being sent to the work camps as punishment.

This priest, ordained to proclaim the Word and bring the Eucharist to his people in a country that allows him no chance to celebrate the Mass publicly, found his congregation and vocation in the needs of these youth. Redirecting them to vocational opportunities that are legal and offer a livable income, he had found a way to represent the love of Christ to these young people.

The Affiliate program flourishes today, but it goes beyond the original concept. Through my Affiliate connections, I have worked in mission in Vietnam, Thailand, Kenya, Tanzania and Peru on a short-term basis, while continuing to work at my Radiology job here in the United States. I have given presentations on mission, in accordance with the original vision for the program, but have gone way beyond the original vision, along with many other Affiliates. Connections with the Maryknoll missionaries, mission experience and mission projects have offered a guiding light that has broadened our paths and touched the lives of many in this country and those we meet in mission.

While walking with our Triune God, have you found your unique path?