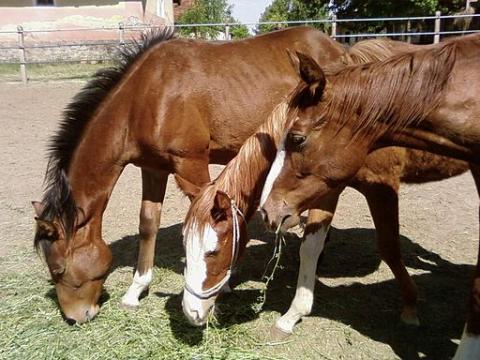 Prepared by:
Maruja and Ted Gutmann-González

Years ago a monastic sister told us the following story:

It was the feast of the Trinity and I was having a hard time relating to it in practical ways: the more I thought about it the more frustrated I felt. Suddenly, I heard a loud noise coming from outside. I moved near the window and saw two horses in the big woody yard which surrounds the convent. They seemed very content, playing and trotting around. Where had they come from? There were no farms nearby as the convent was located near an urban area.

A sudden knock at the door brought me back to reality. When I opened the door I almost fainted. A third horse was standing there looking at me intensely. I stood there mesmerized by those big eyes which seemed to reach the depths of my soul. Then with a neigh the horse turned and went to play with the other two.

I was contemplating the sight in amazement when a man appeared with some ropes, excused himself, and took the horses away with him.

It was not until late that evening that I understood. I was trying too hard to grasp the mystery of that feast day. That sudden, completely unexpected visit, gave me the clue: the Trinity is all about relationship– the deep connections that binds each of us to one another and all of creation. We only need to be awake each moment of our lives to experience examples of Divine Wisdom present here in our everyday lives.

According to Sister of Loreto Elaine M. Prevallet, when Eastern Orthodox theologians “wanted to reflect on the image of God in the human, they didn´t start with the One God; they began with the Trinity. The Trinity is God dynamic, communicating; there is fellowship, communion, love at the very essence or heart of God. One the images they used was perichoresis –indicating a cyclical movement or recurrence: giving, receiving, differentiating. This is an open Trinity, the word perichoresis is close to another Greek word that means ‘dancing around,’ like an eternal divine round dance.”

In our rural, isolated community where we live in the foothills of the Andes mountains, people are accustomed to the daily inconveniences of living life on the edges of society without complaint. When Sirian, a woman who recently moved into the community, was stricken by a sudden illness, she went to the local clinic to get treated. There she waited her turn, along with many mothers and babies and older people with chronic diseases, who filled the small waiting area on a damp, cold winter morning. She overheard people talking about the waiting room being so cold and how unhealthy that was for people who were already sick to begin with. She felt sorry for the all the people who had to come in every day and wait for hours to see the doctor.

Later, when she recuperated, she formed a plan. She organized a raffle, took many trips to the nearby city, and visited all the stores asking for donations. She went door-to-door explaining her plan to buy a wood burning stove for the waiting room in our clinic. At first, she was received with suspicion by some people who thought she was going to keep the money for herself. However, most people trusted her and helped to sell numbers for the raffle. All in all, they realized, everyone was going to benefit from sitting in a warm waiting room when it was their turn to go to the health clinic.

Finally, the big day came. We all met at the clinic for the inauguration of the new wood stove. With music and dancing the new stove was installed amidst much applause for the new neighbor, Sirian, who had taken a risk which united the community to achieve a common goal. Yet the bigger accomplishment that day was the lesson that together in relationship with each other, we can hope for a better life for all. She had joined in the dance and invited others to celebrate the mystery that is life lived to the fullest in community. When we experience what it truly means to be in relationship, we can begin to get a sense of what the Trinity is about.