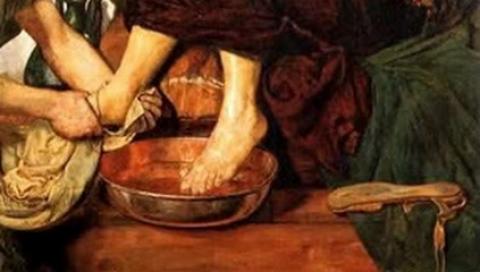 “Let me be a servant to you. Let me be as Christ to you. Pray that I might have the grace to let you be my servant too.” (from “The Servant Song” by Richard Gillard) When my husband and I chose this song for our wedding ceremony, we hoped it would set the tone for our lifelong relationship - a relationship in which we commit ourselves to give to each other completely, but also to be open to receiving graciously from the other. As Jesus reminds us in today’s Gospel, all relationships call us to give and receive. As Peter’s surprise at Jesus’ teaching demonstrates, sometimes being open to being served is more difficult than serving. True relationship and connection happens when the service goes both ways. Everyone has something to offer.

When I was a missioner in São Paulo, I met a woman named Maria do Socorro. She had seven children and was raising them alone because her husband was in jail for drug trafficking. I noticed that Socorro lived pretty isolated from the larger community and asked others why. They said that her husband was a notoriously dangerous drug trafficker and many in the community feared him, so they stayed away.

Socorro worked as a housekeeper in downtown São Paulo, a two hour bus ride from where she lived. Her kids ranged in age from 12 to two years old. She couldn’t afford child care for the younger kids, so she locked them up in the house alone and left the older ones in charge.

One morning when the older kids were at school, the four younger kids were locked in the house alone. Socorro had instructed the older kids to take the house key with them because she didn’t want the younger ones out in the street. The seven-year-old, Roberto, wanted to make coffee for breakfast. He boiled a pot of water and when he poured the water the pot broke and the scalding hot water fell on the leg of his five year-old sister, Mariana. She went into shock and Roberto had to get help, but he couldn’t get out. So he ran to the backyard, struggled over a wall and fell into his neighbor’s yard. She wasn’t home so he squeezed through the bars on her front gate and was able to get someone to call for emergency help. Mariana spent two months in the hospital.

The story spread quickly in the community and people were moved. They could relate to Socorro’s struggles of raising kids alone, to her frustration with not finding work close to home and to her fear of the street violence. After the accident, Socorro was very reluctant to leave her kids at home alone, so she quit her job and this made her daily struggle to survive all the more difficult. Her daughter desperately needed follow-up care and Socorro couldn’t always get it. Marina had to wear a special sock on her leg that held the skin in place as it healed. Months passed and Socorro couldn’t save enough money for the sock. In a surprising act of solidarity, our small faith community, Santo Eugenio, raised the money to help Socorro buy the sock. Many people in the community are very poor, but they offered what they could. They collected close to US$300, mostly in coins.

Socorro was overwhelmed by the parish’s generosity. Several members of the community started to help her with childcare and food. She wanted to give back in some way and asked how. I remember the parish leaders telling her that they were there to serve her and that she didn’t need to do anything or give anything in return. I remember a private conversation with one of the leaders in which he said to me, “What could she give us anyway? She can’t read and she doesn’t have any time with all those kids.” He and the rest of the community seemed closed to receiving anything from her.

Despite the parish’s resistance to accept any help from Socorro, she found several small ways to serve. She washed the altar cloths every week; she swept the church after mass; she started going to mass; she sent her kids to catechism classes; she sent her older kids to help with church events. Slowly, Socorro became an integral part of the faith community. The relationship of mutual giving and receiving continued as the parish helped Socorro get through lean times without a job and she continued to help with cleaning and participating in the community.

The Portuguese word “socorro” means “help” in English. When the community was able to accept her openly, to accept her “socorro,” the relationship deepened because there was giving and receiving. By washing each other’s feet and by letting others wash our feet we build the new creation with mutual love and service to one another.