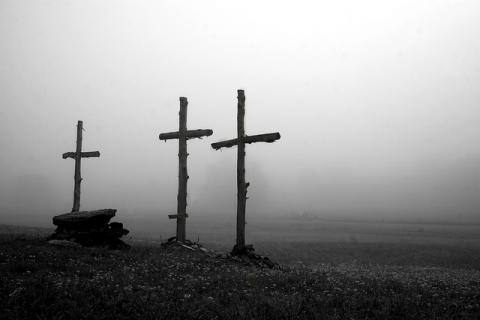 The fear is palpable. Peter, terrified, pulls out his sword and cuts off the ear of Malchus, the high priest’s slave. Within a few hours he would deny Jesus three times.

Many people – surely among them some who had greeted Jesus with enthusiasm when he entered Jerusalem - now kept their distance from him, terrified of the Roman authorities. “We have no king but Caesar!”

The women were there as he hung on the cross - and John, but where were the rest of Jesus’ friends? Were they too fearful to be seen with the condemned Jesus?

Joseph of Arimathea, “secretly a disciple of Jesus,” and Nicodemus, “the one who had first come to him at night,” summoned up the courage and risked burying Jesus’ body. But, clearly, it was dangerous to be seen as a friend of Jesus. What about him struck fear in the hearts of powerful people?

Lay theologian Bill Stringfellow would say it was his power over death:

“It is only when the parables or his works become notorious (the precipitating episode being the raising of Lazarus) that the authorities move against Jesus. Why do these rulers regard Jesus with such apprehension? Why is he an offense and a threat to their regime? The answer that emerges from the biblical accounts is that, in teaching and healing, Jesus demonstrated an authority over the power of death… Death is not the decisive moral power in history, but it is the only moral power the State (or any other principalities) can invoke as a sanction against human beings and against human life as such.” (Bill Wylie-Kellerman, William Stringfellow The Essentials of a Biblical Theology, Orbis Books, p. 60, 67.)

That, perhaps, is essential to the power of nonviolence – it is not afraid of death; it would rather die than kill another person or ignore the death-dealing violence and injustice that are so prevalent in our world.

Jesus lived an active nonviolence that systematically rejected deep injustice and social evil. By word and deed he resisted the violence of unjust social structures. He defied laws and rituals that marginalized poor people and ethnic outsiders, proclaimed release to the captives and liberation to the oppressed, extended the messianic message of justice to the outcasts, and favored the poor. He was truly a subversive. From the state’s perspective, insists Stringfellow, Jesus was guilty.

On Good Friday, as we retell the story and re-enact Jesus’ journey to the cross, it is fitting to remember those who have stood in the shadow of the cross in our times, allowing Jesus’ death that overcame death to inform their own vocation.

Two examples stand out this year: the civil rights march from Selma to Montgomery and the prophetic witness of Archbishop Oscar Romero. Because this is the 50th anniversary of the march from Selma to Montgomery, the account of events at the Edmund Pettus Bridge is on our minds and in our hearts. Irrational fear on the part of authorities in the face of the completely nonviolent witness of those attempting to walk across the Pettus Bridge turned into violence that shocked people across the United States.

Because Archbishop Romero will soon be recognized officially as a saint by the Catholic church, his story is also being retold. Romero’s assassination was breathtaking in its viciousness. His clear, articulate rejection of the brutality being inflicted on poor communities by their own security forces; his pleas to soldiers to stop the killing; his refusal to be dissuaded by the assurances of wealthy friends made crystal clear that the fear of death had no hold on him.

One other example is not nearly as well-known: Some years ago at the height of the civil war in El Salvador, the international community was invited to accompany campesinos who were moving back to their own land from refugee camps in Honduras or from camps for displaced people in San Salvador. Many civilian communities had been displaced by a deliberate strategy of the Salvadoran military to depopulate rural areas, thus depriving guerrilla forces of material (real or imagined) support. Many had been living in camps for years and were simply tired of doing nothing – of waiting for the war to end.

Their action was very well organized and completely nonviolent. Thousands upon thousands went back to their villages within a few months. They knew that their movement home was extremely dangerous. They were moving back into an active war zone against the advice of the government, the military, the church and the United Nations. Those of us who accompanied them saw remarkable courage and determination. They knew they could be killed – as other communities in El Salvador had been killed for less audacious actions, and some, tragically, were. But we also saw their faith, their willing entry into the suffering of the cross – even death.

They were high for Jesus as he moved toward Jerusalem and because he did -- because he took on evil in order to overcome it – Jesus’ followers know that death does not have the final word. And (at times) they act accordingly. Guilty, as charged!

Marie Dennis is the co-president of Pax Christi International, the Catholic peace movement. She is the former director of the Maryknoll Office for Global Concerns.