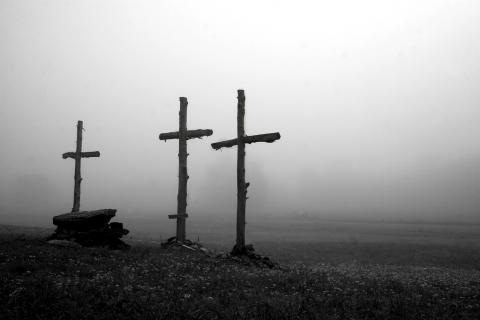 The suffering and death of Christ offers an answer to one of the greatest questions humanity has posed to God. It is a question asked of the Lord every time innocents suffer, their life and happiness torn away by powers outside of their control. It is a question that ties the history of our fallen world together, a history of peoples subjugated and oppressed, and then discriminated against in present day for struggling to overcome these monstrous wounds as if they were never inflicted. Surely God hears the millions of voices crying out for mercy from a fate they had little hand in creating? Surely the Divine that we worship, giving it names such as love and peace, has not forgotten the unnumbered individuals who have been crushed by the malice, or ignorance, of the powerful?

In El Salvador, many people live with “terror on every side,” caught between gang violence, police brutality, and government corruption. Many choose—many more have no choice—to escape north, leaving behind everything: their home, their family, and their culture, in a desperate bid for safety or an easier life. If they even make it over the border of the US, they face exploitation and discrimination in the very country that had a hand in the destabilization of their own. What answer does God give for those who die on the way, who are held in detention camps, are deported back to neighborhood warzones? How are they able to hold firmly to the faith they profess?

There can only be one answer, and that is for God to come to earth, be born human into a humble family that lived in a subjugated country, and himself face the worst of his own world. Fully human, fully God, he was betrayed, denied, and abandoned by his closest friends at the end of his life. He was mocked, tortured, and put on display to die a humiliating death.

A Salvadoran family fleeing north to escape gang violence can pray to a God whose human mother and father fled to escape a murderous king who wanted to kill their child. When a mother has to wait for hours outside a police station to ask why her son was arrested without a warrant in their home by soldiers wearing black masks in the middle of the night, she can pray to a God who was put to death even after his judge declared that he found no fault in him. While a day laborer in plastic sandals carries one hundred pound sacks of gravel on his back in the hot sun, earning eight dollars in ten hours, he can pray to a God that fell three times as he carried the cross he would be nailed to.

One of the most frightening claims that the Enemy will make is that God’s creation is a failure. That it is a contradiction to God’s goodness, a perversion of divine genius, that would be better to have never been. It will say that the only reward is death, “a consummation devoutly to be wished,” as Hamlet says. We have no answer to this except Christ and the Resurrection. More than a high priest, he was a low one, who placed himself clearly on the side of the poor, diseased, and disgraced of society. Our God is one we can worship with our whole hearts, knowing it understands what it means to live in a fallen world. That is the answer given to those who suffer, and we who walk with them: like Christ, we will come before the throne of God, and be exalted to the highest place, and see the light of life itself.