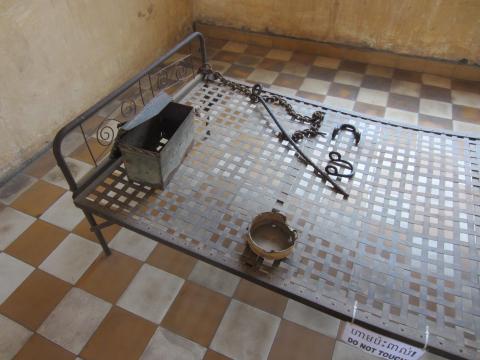 He is not a typical Cambodian man. The only time I saw him outside his house was when I passed him waiting on the corner for his granddaughter to come home from school. He would drop her off and walk her home every day, I later learned.

I suspect he also goes to the market since he does all of the cooking. He doesn’t seem to mind doing “women’s work.” He does it well, I’m told. I remember him sitting silently with a large, flat basket of uncooked rice between his knees. He had spread the rice into a thin layer and showed me how to pick through and remove the bad grains. He moved slowly, deliberately and made into a meditation what some might consider tedious work.

He hardly spoke except to the dog. He has a way with that dog. Indeed, the same dog that snarled at my every approach was docile and playful with his owner. They seemed to communicate in a language I did not know, different also from the one I struggled to learn during those first months in Cambodia.

Not long after I came to that neighborhood I began to wonder about the man—his past, his story. I know little—even now, two years later. I do know that he had been a soldier during the brutal civil war during which a quarter of Cambodians died at the hands of the Khmer Rouge. After the Vietnamese took control of Cambodia in 1979, the family fled to a refugee camp on the Thai-Cambodian border, “Site Two.” It was intended for civilians displaced by guerrilla fighting between the Vietnamese and opposition holdouts. Though there were specific camps for Khmer Rouge soldiers, I’m told the soldiers were ubiquitous throughout the camps that dotted the border.

I don’t recall a clear response from his daughter when I asked about the specifics of her father’s allegiance. Cambodians do not talk about the past, especially the painful parts. She did tell me one detail about her parents that has always stuck in my mind. With that Cambodian enigmatic smile she said, “My father forced my mother to marry him at gunpoint.”

Forced marriages were a reality during the Pol Pot regime. I learned recently about the horrors that followed those hurried ceremonies. Marriages must be consummated and, it is reported, Khmer Rouge even spied on soldiers and their brides to make sure it happened. “Pure” babies must be made, babies who would be the next generation of Angkar, “the organization.”

In today’s Gospel, we hear the story of the crucifixion and death of Jesus. The same man who was proclaimed “Messiah” by his followers hung below a sign mocking Him: “This is the king of the Jews.” The same man that James and John asked to sit at the right and left of, was now flanked by two criminals. In response to the brothers’ request, Jesus said, “You do not know what you are asking.” (Matt 20:22) As He hung on the cross one of the criminals begged Him, “Jesus, remember me when you come into your kingdom.” (Luke 23:42) Jesus did not respond in the same way that he did James and John. Instead, Jesus said, “Amen, I say to you, today you will be with me in Paradise.” (Luke 23:43)

Jesus’ death and final words were in keeping with the message of His whole ministry. Recall, the master became a servant and washed feet. The sinless one spoke to the woman at the well. He who is unstained healed the leper and the hemorrhaging woman. The one who came to fulfill the Law ate with the lawless tax collector. Jesus’ last moments were spent with thieves, men who stole from others. But, to the thief who asked, Jesus gave the promise of salvation.

I still do not know my Khmer neighbor’s story. What I know for certain is that this man has seen terrible deeds. Perhaps he has even committed them. Regardless, what I see when I glimpse him holding his granddaughter’s hand at the bus stop is not a criminal. I see a broken man.