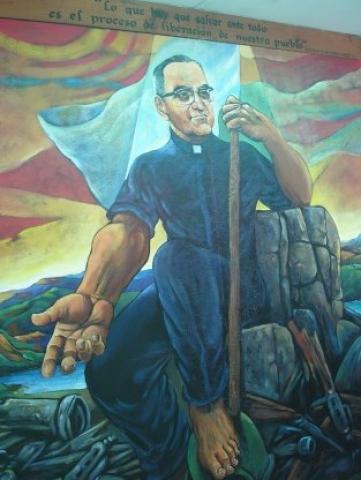 Larry Parr, a Maryknoll Lay Missioner in El Salvador, reflects on the relevance of Sunday's gospel reading for the Salvadoran Church as it honors the 40th anniversary of the martyrdom of St. Oscar Romero.

Today’s readings call us to live in the light and to follow the mission of Jesus by loving those on the margins and working for the Kingdom of God. In the readings, we see that God often chooses the lowly and suffering, like King David and the blind man, rather than the strong and powerful. God’s light shines to drive out injustice and sin.

Living in the light can also cause a conflict with those in power. The blind man was thrown out of the synagogue for proclaiming the truth about Jesus. Likewise, many people are persecuted for living out his message of love.

This message is extremely relevant for El Salvador. In the 1970s and 1980s, many Salvadoran Christians were martyred by the government for working for the Kingdom of God. They were on the side of the poor and suffering and denounced injustice and violence. This includes Saint Oscar Romero, who was assassinated for prophetically denouncing injustice and oppression of the poor; the four United States churchwomen, including Maryknoll Sisters Maura Clarke and Ita Ford; the Jesuits at the University of Central America; and countless more religious and lay Christians that were living in the light of Christ.

Jesuit Father Rutilio Grande was the first to be martyred, along with two lay companions, for proclaiming the Good News to the poor. Father Grande came from humble beginnings and was chosen to follow the mission of Jesus. He was known as a friend of the poor. He organized many Christian base communities and helped people to see God walking with them in their journey for human rights and dignity. Those in power did not like him spreading the Good News to the poor, and had him killed on the way to Mass, together with a catechist, Manuel Solórzano, and fifteen-year-old boy, Nelson Lemus. He lived on in the hearts of Saint Romero and the Salvadoran people in their struggle for a more just and compassionate reality for those in the margins.

This month, the Vatican announced that Rutilio Grande and his companions have been named official martyrs and will be beatified later this year. This is welcome news to the Salvadoran Church, which will be honoring the 40th anniversary of the martyrdom of Saint Romero on March 24, and which has declared this the Jubilee year of the Martyrs. The Church will be remembering all of the martyrs who live on in the light and who work for a world of justice and love.

Four decades after the death of Rutilio Grande and Romero, the struggle for justice continues in El Salvador and around the world. Today, El Salvador is not in a civil war, but the marginalized communities are still plagued by violence and injustice. Many families fear for the lives of their children and are forced to leave their homes in search of safety and dignity. Like the man who was born blind, many migrants are born into these very difficult situations. They are not being punished for their sins, but instead are suffering because of the sins of our society. Many migrants are being dehumanized and are being blamed for their own suffering. They are detained, put in cages, or sent back home where they can be killed.

Today's readings and the lives of Rutilio Grande and the martyrs are calling us to see the light of God in the migrants who are suffering. We are not called to hate or fear the stranger, but instead work together for justice and peace. Jesus calls us to love our neighbors and proclaim the light over darkness. Rutilio Grande and Saint Oscar Romero continue to be our guides as we look for the light of Jesus on the margins and work to build the Kingdom of God, full of love and dignity.