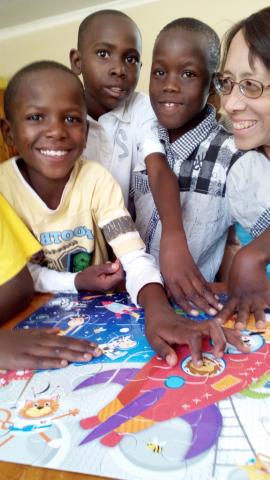 Joanne Miya, a Maryknoll lay missioner in Tanzania, reflects on the unlikely prophets in our midst.

“The Spirit entered into me and set me on my feet.” With these words Ezekiel describes how he came to be a prophet to the Israelites during their exile in Babylon. He was called by God, and the Spirit not only set him on his feet, but also guided his steps.  And just in case Ezekiel was naive enough to think that this would be easy, God explained that “whether they heed or resist… they shall know that a prophet has been among them.” Perhaps that is a nice way of saying, “There is no telling what the outcome will be.”

How often have we felt “called” to confront a relative, friend or co-worker who we believe is mistaken? We feel confident that our reasoning is sound and our argument convincing. More times than not, rather than converting them to our way of thinking, the result is further alienation. How did our strategy fail?

Maybe the answer lies in today’s psalm, which is a cry of humility and a plea for God’s mercy. Are we willing to start by acknowledging our own sinfulness? Do our interactions with others reflect God’s mercy?  Pope Francis has said that, “A true prophet is the one who is capable of crying for his people and also saying things strongly when he has to.”  Our egos are more than ready to provide the incentive to confront others, but only the Spirit can provide the humility and mercy to do so with compassion.

As a Maryknoll lay missioner serving in Tanzania, part of my ministry involves working with orphans and vulnerable children. The children typically continue with us until they finish high school. A few make it to college, while others pursue vocational training.

Sandy was an exception. As a young man with special needs, he only went as far as 7th grade. He loved coming to the center where he felt respected by the other teens. One weekend, project money was stolen from our office. The police determined that a former student, Kulwa, was responsible. We all knew and loved Kulwa, which made it harder. I met with the group, explained what had happened and invited everyone to share any feelings or suggestions they might have.

It was a difficult discussion, but finally Sandy spoke up, “We need to pray for Kulwa so that he sees that what he did was wrong and returns the money.” We were speechless. None of us had suggested praying for Kulwa. Sandy exemplified the compassion and mercy of a God who always invites us back. We were responding from our heads. Sandy was responding from his heart.

Although things did not turn out as Sandy had hoped, we all learned a valuable lesson from an unlikely prophet. In Paul’s letter to the Corinthians we hear, “My grace is enough for you, for in weakness power reaches perfection.” We witnessed these words in Sandy.

In today’s gospel, Mark explains that although Jesus “kept his large audience amazed,” they still could not get past the fact that he just did not fit their preconceived notion of what a prophet should be. What could a carpenter’s son teach them? We read that Jesus was so distressed by their lack of faith that “he could work no miracles there.” Even the Son of God himself, who is the definitive example of compassion and mercy, was rejected.  I find some hope in the fact that rather than quit, he “made the rounds of the neighboring villages instead.” In other words, you can only do what you can do.

This Independence Day, let us remember that our diversity is our strength. Let us put aside our biases, prejudices and preconceived notions about who might have something to offer. The truth is, we all need each other. Pope Francis describes a prophet as one who “restores the roots, restores one’s belonging to the people of God in order to go forward.” Let us commit to restoring our common roots and to creating a more compassionate world together.

Photo: Joanne Miya with some children doing a puzzle, courtesy of Joanne.