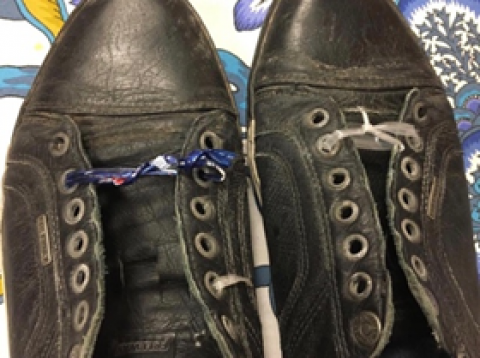 Maryknoll Sister Genie Natividad reflects on how she glimpsed the Kingdom of God at Casa del Refugiado, a shelter for asylum seekers at the U.S.-Mexico border.

Life is not always easy and light. It is not without its burdens; it is full of trials and tribulations. As I read the selected Gospel for today, I remember vividly the many faces of migrants arriving at Casa del Refugiado in El Paso, Texas, where I volunteered for a month last year. Casa del Refugiado is an old electrical utility warehouse that has been turned into a place of hospitality for asylum seekers crossing the southern border between the United States and Mexico.

For the immigrants and refugees who arrive at this shelter, the burden they have been carrying, the “yoke of oppression,” is lifted from their tired and weary shoulders, at least temporarily. They come this far leaving behind a trail of sweat and blood, a trail of suffering and pain. What lies ahead is uncertain. Will they finally reach the end of their journey and realize their dream of safety and security? Will they have a piece of the American dream, a life of peace, liberty and the pursuit of happiness? While they rest at the shelter, having successfully crossed the border is the only thing that matters.

It was heart-breaking for me to see so many arrivals every day during my one month stay at the Casa. Individuals, families, and children would come nearing exhaustion after being detained by Border Patrol and Immigration and Customs Enforcement. One person in every family who came had a GPS tied onto their ankle to monitor their whereabouts as they waited for an immigration hearing. The only clothes they would have were the ones they were wearing. Some came in flip flops. Those who did have proper shoes had their shoelaces taken from them as part of security measures. Many had no socks, which is why they shivered from the cold weather of winter.

These asylum seekers were, to us, house guests. They slept on cots on a large floor area. There was no functioning toilet in the warehouse; instead, there were rows of porta potties (outhouses) with sinks located nearby. A huge Red Cross shower truck was also available, supplied with soaps and shampoos.

The warehouse-turned-hospitality center had a big dining room, a playroom, a clothing room, laundry, donation room, an office, and an extra space for various activities, especially for children. The Casa also had a chapel.

The chapel was a wonderful space for the guests. It was a place of solace, a sacred and quiet place. Here, I often would see guests absorbed in quiet prayer, their faith strengthened, their spiritual thirst hunger quenched and satisfied. A priest would come to say Mass once or twice a week. I would often join our guests at mass where we would sing, pray and worship together.

I worked six days a week on an eight-hour shift doing all sort of things at the Casa. In the  hygiene room, I handed out blankets, sheets, towels and hygiene kits to the refugees. I also helped out in the laundry. In the clothing room, I helped them find what they needed. And I helped serve food from our modest kitchen, often sitting down and eating with our guests.

I look back on this and think of the table fellowship of Jesus. This was the main venue for his mission: making disciples, making friends, building relationships. In a more significant way, this was where he began building the Kingdom of Heaven, the Reign of God, the reign marked with justice, compassion, and mercy. This is what is reflected in the selected Gospel today.

Immediately in today’s Gospel we see a paradigm shift: “Blessed are you, Father, Lord of heaven and earth; you have revealed to little ones the mysteries of the kingdom.” Here at Casa del Refugiado in El Paso, Texas, the “little ones” come in droves, not knowing that what they will receive is far greater than what they hoped for or could ever imagine: the Kingdom of Heaven. Here Jesus is waiting to remove their yoke and hand them their reward.
•    “Blessed are the poor for theirs is the Kingdom of Heaven” (Matthew 5:3–12).
•    “The last shall be first, and the first last: for many are called, but few are chosen” (Mt. 20:16).

Instead of a regal figure, we see in Jesus the humble servant riding a donkey in the first reading. In El Paso, Texas we would see Him in the migrants wearing flip flops and the volunteers handing out clothes and food and drink or sitting at the table, not with the rich and the powerful, but with the poorest of the poor. At the Casa del Refugiado, he is forming his community of disciples and, unbeknownst to our guests, he is building a Kingdom where they are the first to enter and partake in the banquet prepared especially for them in Heaven.