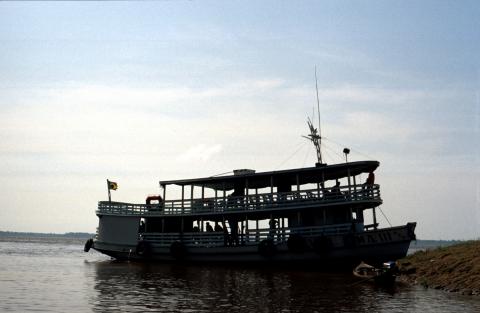 As a Maryknoll missionary priest working in Brazil since 1994, one of the things that has always inspired me is the National Brazilian Bishops Conference’s Lenten Campaign, where a theme is chosen each year to seriously reflect upon by the whole church in Brazil during the Lenten season. This helps to shift the focus off of a more individualized spirituality of focusing on personal sins to looking at the reality of sin as something larger that permeates all of society. This approach serves to challenge me to a deeper personal transformation, but also to work in solidarity with others towards a communal transformation as well.

One experience that I had early on in my ministry has helped me to see the importance of working for both individual and communal transformation. I was on a passenger boat floating down the Amazon river when my friend and I saw a group of kids drinking soda pop and throwing their empty cans into the river. Our environmental conscience immediately urged us over to talk with the group and encourage them to deposit their empty cans in the trash container that was located at the center of the boat. They were quickly converted and began throwing their trash into the container rather than the river below.

Then, lo and behold, about an hour or two later, to our despair, we saw the service worker on the boat come to empty the trash container that was overflowing. He took the full container of trash, carried it over to the edge of the boat and dumped it into the river to empty it out. We looked at one another in disbelief and horror mixed with some embarrassment realizing that the group of kids we had convinced to deposit their cans in the trash container had also witnessed this.  For me, this was a prime of example of why it is not enough to just focus on personal transformation, but why we also need to work to change the sinful structures that perpetuates individual corruption.

The theme for this year’s Lenten campaign in Brazil is “Solidarity in overcoming violence!”  Some of the key issues we are reflecting upon which contribute to a violent society are: economic inequality, consumerism, human exploitation, drugs, a punitive justice system, racial, gender and sexual discrimination, verbal attacks, road rage and domestic violence. Many of these issues contribute to violence not just in Brazil but across our increasingly globalized world.

During this Lenten season, we are reflecting upon how we can create a culture of peace to replace the deeply embedded culture of violence. This deep soul searching at both the individual and communal levels demands that we enter into the ambiguity of the wilderness and confront the demons at the root of the problem. It is a strong temptation at times to project the blame on something outside of our self so that we don’t have to take full responsibility for our part in the sinful structures of society.

The first step in deep transformation is to become aware of all of the many ways that our society inflicts violence on the most vulnerable segments of society, such as: minority groups, immigrants, non-human living creatures, youth, women and children. Contemporary research has revealed that living in a racist society as a minority can be just as devastating as being in the line of gunfire or being a victim of sexual assault in producing symptoms of Posttraumatic Stress Disorder (PTSD).

One way we can begin to become more aware is by listening to the perspective of people who are vulnerable and are suffering in society. Then we can begin to look at the many micro-aggressions that are often committed on a daily basis that accumulate to form a culture of violence. A heightened awareness of our violent attitudes and societal structures can help move us to solidarity with one another in creating a culture of peace that is in keeping with God’s covenant which respects the life of every living creature.

“The time has come’ Jesus said ‘and the reign of God is close at hand. Repent, and believe the Good News.”