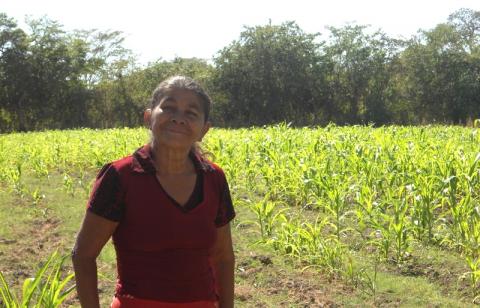 In today´s Gospel Jesus resists the Devil’s offers of materialism and power, saying that he will serve and worship only God. Do we model Jesus’ action by the traditional practice of giving up something for the 40 days of Lent? Perhaps what is really needed is to take a deeper look at our lifestyles and habits. What are our temptations? Do we confidently turn them aside to rely on God alone?

Since the Central America Free Trade Agreement came into force, U.S. corn is now cheaper to buy than that Salvadoran corn, making it difficult for local farmers to compete and stay in business. Perhaps the greater sin is that many of us do not even think about these inequities. Perhaps we have trouble recognizing them as temptations because we have come to think of them as normal; we don’t stop to think that evil now comes in the guise of international commerce.

The first reading speaks of an immigrant people’s hope for God’s protection when they are mistreated by their host country. I served as a Maryknoll lay missioner for eight years in El Salvador, a country from which millions of people have emigrated to find a better life, most of them to the U.S. Many left to escape the violence during the 12 year civil war, and now many leave to flee the gang violence that permeates much of the country; and of course many leave due to the serious lack of employment that offers a living wage.

Often, the youth of El Salvador are not hopeful about their future; even those who manage to get a high school or college education cannot find a job that would support themselves let alone their family. During an HIV education workshop sponsored by the non-governmental organization for which I worked in El Salvador, we were divided into groups based on age and gender to discuss what their groups experienced as the biggest threats to life. The group of males between the ages of 19-29 listed death as the top threat, not from HIV, but from violence. Young people do not see much hope in El Salvador and see leaving for the U.S. as their only option. Another option that some consider is to join a gang that offers them a sense of community and belonging.

Still, the trip north in search of a better life is full of perils. In 2011, dozens of immigrants from Guatemala and El Salvador were robbed and massacred in Mexico. Family members often wait months to hear if their loved ones have made it safely to the U.S., and many hear nothing because the family member becomes a victim along the way. Those that do make it to the U.S. without documents are often separated from their children and live in fear that they will be sent back. They work in low-paying jobs and to try to send money home to support their families. In El Salvador this practice accounts for a major part of the economy.

Youth who have been raised in the U.S. and think of this country as “home” are denied opportunities to attend college or get a job. They long to contribute to society and to prosper.

In Deuteronomy, the Israelites arrive in the Promised Land and give thanks to God for the covenant between the people and God. At the same time the Israelites are cognizant that their part of the covenant is to obey the commandments and to serve God. They, too, faced temptations of false gods and as a community often had to ask for God’s forgiveness and grace. This is what Lent is all about, realizing our failure to serve God – by the way we have become complicit in supporting unjust relationships by the way our trade laws are written to favor U.S. farmers and by the way that immigrants seeking a better life are treated when they arrive. These 40 days of Lent are about trying to make the changes to recognize God in the face of others and to truly show thankfulness to God for all we have received.