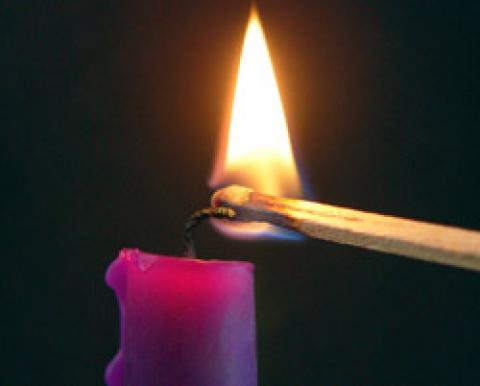 "The days are surely coming, says the Lord, when I will fulfill the promise …”

“Be on guard so that your hearts are not weighed down with … the worries of this life … Be alert at all times ….”

The message of the readings on this first Sunday of Advent is unmistakably clear: be ready; prepare for the coming ...

For half a century the people of Colombia have been immersed in seemingly endless cycles of violence and war. Despite repeated, courageous efforts to transform conflict and build peace, the reality of life for millions of Colombians has been one of fearful waiting, flight and imminent death.

But a recent conference on nonviolence at the Universidad Minuto de Dios in Bogota made visible another, very important part of the story: Colombians are ready, vigilant, hopeful. They know the days are coming when the promise of peace will be fulfilled.

That 500 people of all ages – from young students to seasoned leaders of local communities on Colombia’s Caribbean coast – would make their way to Bogota for a conference on nonviolence was itself extraordinary. Far from being “distracted by the anxieties of daily life,” they are clearly poised to welcome the in-breaking Reign of God – to nurture a just peace that will help define the Coming.

The depth and sophistication with which the topic of nonviolence was addressed during the conference was also amazing. Formal sessions and informal conversations made crystal clear the fundamental option of many Colombians to nurture the virtues of nonviolence in their own lives and in their communities. Anticipating the fulfillment of the Promise, they are hopeful about the possibility of peace and committed to making it real even now.

Their commitment is not unlike that of so many other peacemakers living in situations of horrific violence. Women in the eastern part of the Democratic Republic of the Congo, for example, are building strong networks of support for survivors of the terrible violence against women so prevalent there. In Palestine, international and Israeli activists, as well as women and children, have been increasingly incorporated into a growing nonviolent struggle against occupation. In Burma, Nobel laureate Aung San Suu Kyi led a long, nonviolent campaign against a brutal regime that helped keep hope alive for oppressed people.

And on this day in particular, we are reminded of the four U.S. women brutally killed in El Salvador on December 2, 1980. When corpses littered the streets and the number of disappeared was rapidly escalating – when bishops, generals, and government officials demanded neutrality from the Church – these four women, Maryknoll Sisters Ita Ford and Maura Clarke, Ursuline Sister Dorothy Kazel and Cleveland Mission Team lay missioner Jean Donovan, had chosen to accompany a people made profoundly vulnerable by war and by repression. They lived the virtue of solidarity, not neutrality. Poor people, they believed, were one place of God’s revelation in history – an opening where the God of hope and possibility was discovered in the midst of suffering and fear.

Like those who have been waiting in hope through long Advents of violence and repression – in Colombia, Palestine, the Democratic Republic of the Congo, Burma and in so many other corners of our broken world, these four women modeled for us the hopeful attitude that we also are invited to adopt in this holy season.

Each time we celebrate Eucharist together, at the end of the Our Father, just before the sign of peace, the celebrant speaks for us a beautiful Advent Prayer:

Deliver us, Lord, from every evil, and grant us peace in our day. In your mercy keep us free from sin and protect us from all anxiety as we wait in joyful hope for the coming of our Savior, Jesus Christ.

During these weeks of Advent, as we wait in joyful hope for the coming of our Savior Jesus Christ, may we also nurture the virtues of nonviolence in our own lives, our communities and our nation as we work for a just and sustainable peace on earth.