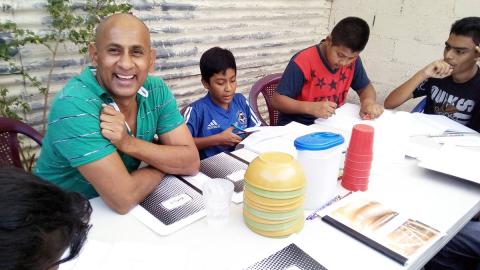 Today's reading from the Gospel of Mark causes me to reflect in three parts on my life and calling as a Maryknoll Lay Missioner in El Salvador.

It has been more than four weeks now since Carlos,* a twelve-year-old boy, has been missing. His family is devastated and beyond grief. Speculation as to his disappearance is rampant but also hushed. Carlos lives deep in gang territory, cloistered to the outside world, where help and the law are often detained at the neighborhood’s invisible borders.

Raul has scars, bruises and burn marks on his body. Erika bears the disfiguring branding of a metal spatula on her upper arm. Maria just celebrated her fifth birthday mourning the absence of a father lost somewhere on the migrant trail to the US. Carmen’s mother has moved on to another relationship and Carmen is terrified of her stepdad who reeks of alcohol and abuse. Only three and a half, she lives out of a suitcase and is bounced around between two houses – her mother’s and her grandmother’s. Carmen rarely smiles; her striking brown eyes are sad and she is fearful of her world.

Celia’s laughter is more a mask for the terror she feels. Juan does not know how to make friends; he picks on weaker children and validates the chaos of a bully. Miguel prefers his invisibility and can spend hours drawing in his frayed notebook. Alejandra talks incessantly while Angel drowns out all ambient noise with headphones blasting at excruciating decibels. I don’t think Sarah has nearly processed her mother’s suicide whereas Daniel certainly cannot be a child anymore for, at the age of eight, he has to sell fruit and vegetables to help support his family.

In the afternoon shadow of the Quetzaltepeque volcano, on the margins of the city of San Salvador, lies a small suburb listed high amongst the country’s most dangerous developments.  UPS does not deliver here nor does curiosity favor the stranger keen on exploring its innards. While at first glance everything does seem normal, unseen eyes follow one’s every move.

When I first started working here as a Maryknoll Lay Missioner, the women I worked with were afraid for my safety. To them, my skin color, shaved head, and youthful looks suggested the guise of a gang member. They felt that I would be mistaken for a rival and harmed. Over time, though, my face became familiar to the community and I was invited into the lives of the people. I especially grew to love my work with the children, but the stories of Carlos, Raul, Erika, Maria, Carmen, Celia, Juan, Miguel, Alejandra, Angel, Sarah, and Daniel are haunting. Like Job, their voices cry out for healing and binding for their wounds.

In the Gospel of Mark, Simon’s mother-in-law is sick with a fever and when Jesus is told about her illness, he goes over to her, grasps her hand and helps her up. Jesus touched and healed. In the Gospels, Jesus also raised the dead with his touch. He gave sight to the blind, the mute could speak, the deaf could hear, and the crippled could walk, all by his touch. People pushed through crowds, came from surrounding countries, touched the fringe of his cloak, and even came through the roof to experience the healing power that flowed through his hands.  And all who touched him or were touched by him were healed. Jesus laid his hands on little children and blessed them. He also touched those who were socially “untouchable” like lepers and the woman who was hemorrhaging and healed them. And when he went to the centurion’s house, it was, to touch.

To me, the most important dimension of Christian discipleship is healing.  What distills from the Gospel miracles is not that Jesus is some sort of esoteric magician who can solve all of life’s problems, but rather that He is the one who brings healing and hope into the most abject human situations. And whether these human situations are created by sickness, grinding poverty, war, violence, lack of self-esteem, pride or prejudice, the result is all the same: people are in need of healing.

As a Maryknoll Lay Missioner, this has become my calling – to heal a broken humanity. And while my work does demand that I help the children with their homework, give them workshops on human formation, teach them to cook a meal, show them how to create art or sit cross-legged with them to partake of high tea with their dolls, my true ministry has become surprisingly simple – listen to them, grasp their hand and help them stand in a beautiful country that is unfortunately riddled with poverty, violence, and instability.