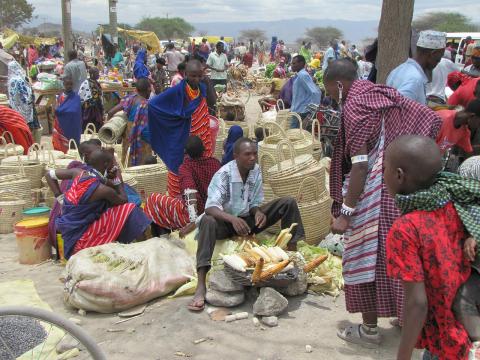 “You are the salt of the earth…You are the light of the world.”  These are the words we hear in today’s Gospel.  You don’t need a lot of salt in your kitchen, but a little bit sure does make the food taste better.  We are called to be like salt.

Night time in rural Tanzania where I served on mission is very dark.  If you don’t use a flashlight you may stumble upon a snake or the famed army ants that crawl up your legs and bite you all at once!  But, when you have a good flashlight all is well.  We are called to be light in the world and we can’t hide that light from shining on others, offering them safety and comfort.

St. Paul acknowledges that it is not he who brings Good News to people but the Spirit of God alive in him.  We are called like St. Paul to go out among others filled with the Spirit of God.

To do what; the prophet Isaiah tells us:

“Share your bread with the hungry, shelter the oppressed and the homeless; clothe the naked when you see them… Then your light shall break forth like the dawn...If you remove from your midst oppression, false accusation and malicious speech; if you bestow your bread on the hungry and satisfy the afflicted; then light shall rise for you in the darkness, and the gloom shall become for you like midday.”

Let me share a story with you.  I call it ‘A Precious Moment’.

I was the Catholic Chaplain at the national medical university in Dar es Salaam, Tanzania.  The university shares its campus with the national hospital.  There is also a large slum called Jangwani situated not far from the hospital.  The news must have spread that Fr. Michael will help people in need.  That was nice, but it resulted in a steady stream of people coming to my door.  I was getting a bit overwhelmed.

Many of the cases were genuine but some were con artists. Still others, while poor, pretty much would say anything it takes just to get some assistance.  For so many, giving them money was just not the answer to the problems facing them.  Poverty is such a horrible disease!  I was getting discouraged.  Sometimes I felt I needed a social worker that could listen and direct people to places where they could find the proper assistance.

I think the news also spread that Fr. Mike asks many questions and often does not give money; so the numbers at my door eventually reduced.  Nevertheless, one day a lady came to the office.  She was ill, stricken with AIDS.  Her children and husband had died.  She was told to vacate the room where her husband was renting.  She had no money and felt it was time to return to her parents’ home situated on the other side of Tanzania about 900 miles away.  Her name was Rehema, which translated to English means ‘Compassion’.  I tried to console her and direct her to the local parish.  Already she was receiving medicine from the Archdiocesan AIDS outreach program.  She seemed lost, her spirit broken.

I decided to give her 50,000/= shillings ($50 U.S.) for the trip home. She thanked me and began to shed tears.  As she stood to leave she said she would board a bus that very day.  Rehema extended her hand and then went down on one knee thanking me so much for helping her.  I took her hand into both of mine and prayed for a safe journey.  As Rehema left the office, it occurred to me that this had been a precious moment.  I had just been in the presence of God.  Jesus had come to me as Rehema asking me to never harden my heart to those who come to my office in need.

Jesus tells us: “Your light must shine before others, that they may see your good deeds and glorify your heavenly Father.”  To be salt, to be light is our lifelong vocation and while it's not easy, it can be so rewarding when we comply.  On that day Rehema felt blessed for my assistance.  I was salt and light for her, but in reality, I recognized I was the one being assisted and indeed blessed!  She was salt and light to me.  That evening I was the one on bended knee before God grateful for such a precious moment.

Photo: A market in Tanzania.