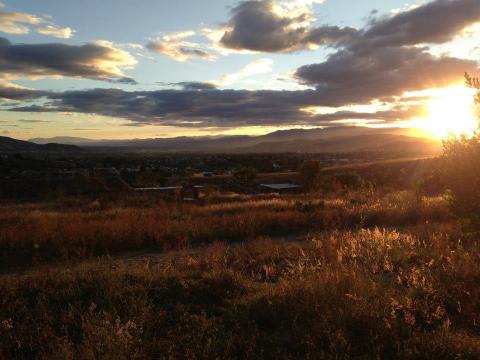 Today’s readings begin with Stephen, the first Christian martyr, about to be savagely fallen upon, beaten and murdered by stoning. Yet he is filled with the Holy Spirit, that is, filled with love, and gazing into heaven, he sees the glory of God. This glory is defined as the essence of Christianity by St. Irenaeus in his second century declaration that “the glory of God is a human being fully alive!”

God’s glory has often been emphasized as otherness, transcendence and separateness, but as Elizabeth Johnson develops beautifully in Friends of God and Prophets, in biblical terms, the glory of God truly is beyond our imagining but in fact is always revealed in God’s inherent involvement with the world in creative and redeeming care; manifest in and through historical events of peacemaking and liberation. “It signifies divine beauty flashing out in the world and in particular, bent over brokenness and anguish, moving to heal, redeem and liberate, a synonym for God’s presence and action in the midst of historical trouble.”

Our globalized and fractured modern world is beset by a lot of trouble, sin and sorrow. We daily witness growing concentration of wealth and power, seemingly endless conflict, genocidal wars, homelessness, malnutrition, corruption, economic and social exclusion, and the ever deepening ecological crisis of humans surpassing Earth’s capacity to sustain life and to continue the evolutionary process. Case in point: the irreversible extinction of 10 percent of all living species in the last quarter of the 20th century. The World Council of Churches has bluntly stated that the “stark sign of our times is a planet in peril at our hands,” our very own harvest of violence, injustice and environmental devastation.

Worldwide it is estimated that 25 percent of arable lands are seriously deteriorated. In Mexico, where I have lived for the past 44 years, 64 percent of the land presents some degree of damage, a principal cause for migration from rural areas either to “misery belts” on the outskirts of Mexico’s cities or to the United States and other wealthy countries.

In response, eight years ago a group of local lay people started a project called “Aldea Verde” (Green Village) to cultivate “eisenia foetida,” better known as California red worms, and to produce humus (worm castings), the most effective alternative organic means for recovering and restoring depleted soils. Partnering with local community foundations, we have given hundreds of courses to people who share our concerns about food sovereignty and soil restoration, mostly farmers who want to raise production by repairing soils previously ruined by chemical fertilizers. In addition, groups of women in poor communities have been empowered to improve their family’s nutrition by turning their organic garbage into worm castings, and by learning to create and tend backyard vegetable gardens. With partial government funding last year, we installed 12 worm production projects in marginalized rural communities where migration has been particularly devastating, instructing and accompanying local farmers in worm and humus production, and thus enabling them to keep their families together and find a dignified livelihood while staying in their communities of origin.

We are discovering in a new way that the glory of God is the human person made progressively more fully alive - through restoring soils, through improving nutrition, through eliminating the need to migrate for survival, and through creating livelihoods that sustain local economies.

Today’s Gospel from John tells us, “Do not let your hearts be troubled!” in spite of all the suffering and trouble we encounter. The way, the truth, and the life of Jesus are the hallmarks that enable us to believe in his promises. We only need to do our part and to remember that Jesus promised to do whatever we ask in his name, for the Glory of God – breaking down barriers of poverty and ecological destruction so that all may have a greater participation in making and becoming human beings fully alive!