Feast of St. John the Baptist 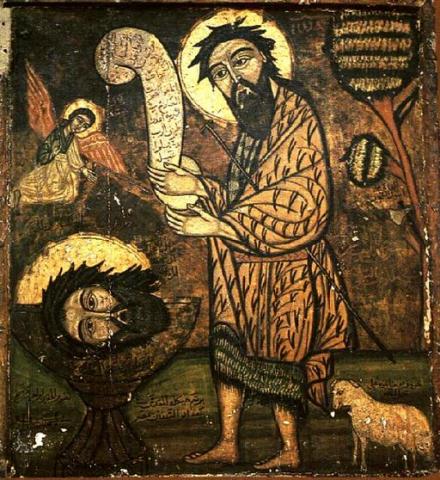 John the Baptist is one of the most interesting and mysterious figures of salvation history. He is the son promised and named by an angel. During his early life, John had a large following of devotees, some of whom became Apostles. His message was straightforward: we each need to repent and work for a change of heart.

There is nothing suave, esoteric, or politically correct about John’s approach. His very way of being is, and was, deeply challenging.

Despite his abrasive manner, John is revered in the Jewish and Muslim traditions as a major prophet. In both Eastern and Western Christianity, he is honored as the last of the Old Testament prophets, as well as precursor-prophet of the New Covenant.

We learn much about John from the descriptions that Christ himself offered. John is definitely not a “reed swaying in the breeze, nor arraigned in fine garments.”

While John was baptizing people in the Jordan River, Jesus, who had no need for spiritual cleansing, comes to be baptized by John.

John asks, “Should you not be doing this to me?” None the less Jesus shows his deep respect for John and his teaching and is baptized. Perhaps it is the humility and respectfulness of Christ for John that brings about the voice of God calling Jesus his Son and assuring John how well pleased the Father is with His Son.

Because this theophany occurred in the presence of John, we know that God sees John as worthy to be a witness.

The season of Advent is the time of the Church year in which we hear many Scripture selections about John, his activities, and his encounters with Jesus. John’s message to prepare the way of the Lord is the hallmark message of Advent: Prepare for the grace of not only the coming Nativity, but also, prepare for the return of the Lord.

John’s example to us is one of courage. He speaks out against the illicit marriage of Herod to Herodias. Her daughter Salome is convinced to ask for John’s head as a reward for her exotic dance. While imprisoned, John is assured of the miracles of Jesus.

John seems to be the antithesis of political or religious correctness. He speaks clearly against sin and wrong doing without concern for his personal welfare or the niceties of his day.

To the unrepentant or the immoral he is more of an itch than the Camel hair tunic he wore. He makes working for justice and saying the unpopular truth a consistent feature of his faith in action.

If we are not made uncomfortable by his example, then perhaps we have become too tamed to challenge the world, or ourselves, to change. In an effort to be more agreeable, our voices in our own modern desert can easily become nothing more than feint and ineffective mumblings.