Feast of Pentecost (Year B) 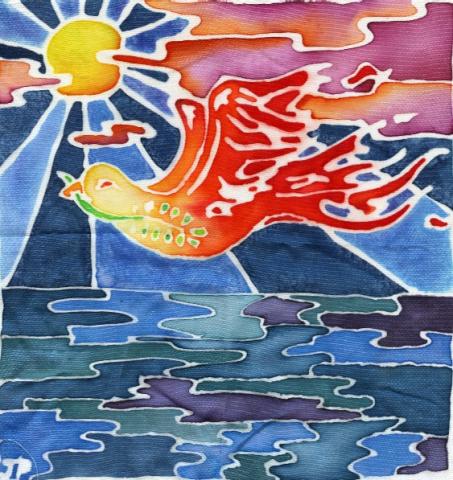 Sr. Euphrasia (Efu) Nyaki, MM, who serves in Brazil, wrote the following reflection which was published in A Maryknoll Liturgical Year: Reflections on the Readings for Year B, available from Orbis Books.

In the early 2000s, the municipal government invited a team of us who work with women in the periphery of the city of João Pessoa to help in the formation of a women’s group in the newest section of the city. This particular section of the city has a special connotation since it is the area where the local government just finished a land and housing settlement for a number of communities. We were invited to work in this area because it is known to be especially violent.

As we listened to the women in this new group, we learned that the majority of the community members waited approximately five years to receive their housing titles. Carmelita, one of the women, said desperately, “I waited for five years to have the title for my own house, my own home, I am very moved emotionally and I give thanks to God, but sadly, at the same time I am in the midst of so much violence, more violence than ever.” After pausing to wipe her tears, she continued, “While we were waiting for the government’s promise to the housing settlements, we slept outside or even under the plastic cover and nothing bothered us. Five years later, we have a house with doors and windows and yet, we are afraid to come out of our houses when we listen to the gunshots outside our doors.” Another woman named Suely added, “During this year alone, I have lost an uncle and a brother, both assassinated due to drug dealing. Now I worry so much about what will happen to my two-year-old son.” Another woman, Maria, questioned us, “How can I live in peace while I see so much violence around me?” She said, “I noticed that lately I do not have much patience; I am also aware that I am becoming very violent with my husband and my children since I am constantly nervous wondering who is next to be assassinated. My nervousness leaves me very irritated; this is also affecting my physical health.”

This group is composed of 15 women; each of them, in separate two-and-a-half-hour sessions, shared similar stories. This went on for the first three months of our course. The truth is our team does not have answers to these situations; we offer instead the space for women to talk, a listening ear, and our hopes and prayers that a healing process will begin. Many of these women and their families have gone through deep and multiple life traumas. Climate change forced some to move from the rural areas to the city; others lived in city garbage dumps where they had very little to eat; some of them were house girls, or maids, who were treated very badly and had no rights to their own earnings. Some worked hard and long hours in factories where they were exposed to life-threatening toxins. A few of them have witnessed their own children, fathers, uncles, and brothers being assassinated as an outcome of drug dealing. All in all, these women received their own houses but continue to witness and live in the same or worse situations of violence.

In today’s readings, Jesus says to the fearful disciples, “Peace be with you.” What does the word “peace” mean to people who are constantly experiencing violence? The word peace is hard to understand when one’s experiences and reality are the opposite. Yet we are called to be fully present as we listen to people going through such violent situations. The second reading from First Corinthians 12:12 states, “For just as the body is one and has many members, and all members of the body, though many, are one body, as it is with Christ.” This message reminds us that while so many people in the world suffer under different forms of violence, the entire universe also suffers from violence. Brian Swimme teaches that we are all made from the same material that made the stars, the moon, and everything on the entire planet. If we make ourselves present and listen to and experience the pain of the universe, then we could all collaborate to bring peace to the entire universe, the entire body.

As we work we have noticed that many people in the community have been paralyzed by fear: They have lost the spontaneity of helping one another, of being present to one another, of telling the truth, of opening the door to help the neighbor who is being violated, etc. The feast of Pentecost is an opportunity to remember that the spirit of the risen Jesus is with us, bringing new energy to become aware of and in touch with the inner peace Jesus offers. It is this inner peace that needs to be brought out to the world. As the healing process beings we are made aware that there is always a chance to start again. God sends forth the breath that renews the face of the earth.

In the first reading, we heard, “When the day of Pentecost had come, [the disciples] were all together in one place, and they were filled with the Holy Spirit and began to speak in other languages, as the Spirit gave them ability.” Each one of us has a special gift to contribute to peace building. Each gift and person in society is needed in peace building. The oppressors and the oppressed have to participate equally in the act of helping in each other’s transformation, because ultimately, under the laws of the universe we are one.

Family Constellation, a method of healing done here in Brazil, taught me a great deal. I learned and experienced that, in a process of true healing, peace and reconciliation will come when we all forgive and let go of past experiences. The resurrected Jesus appeared to the fearful disciples bringing the Holy Spirit as a symbol of transformation.

The transformation that comes along with forgiveness is not limited to only the individual or those directly affected by the act; on the contrary, forgiveness transforms the entire universe, the entire body.

Image of the Holy Spirit by Jordan Pedde