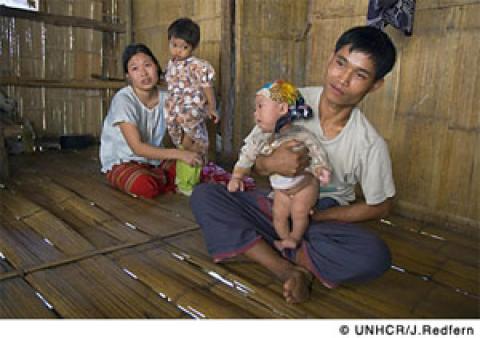 Year’s end seems an appropriate time to celebrate the Feast of the Holy family, for it affords us an opportunity to feel gratitude for the gift that family has been to each of us. That gift involves mixed emotions, for being family means times of joy and sorrow, gain and loss, happiness and pain.

In the Gospel this morning Saint Luke recounts a moment of pain and anxiety in the life of the holy family. It was a Jewish custom to travel annually up to the temple in Jerusalem to perform the rites of Passover. Both for reasons of security and the pleasure of visiting, this journey was make in the company of relatives and others from the local community, the women usually travelling in a group together, slightly apart from the men and older boys. Passover was an occasion much looked forward to by the villagers, just as we look forward to the celebration of Christmas in the company of family and friends.

Imagine the horror of Joseph and Mary at the end of the first day’s journey homeward when they found Jesus had gone missing. Luke tells us they hastened back to Jerusalem, filled with anxiety, and sought for three days before finding him in the temple where he’d been left.

The scripture gives the exchange of words between Mary and Jesus when she at last found him, adding that she did not understand his words, but kept them in her heart. We might wonder what would have been in her heart for the rest of her life had she not found him. But Luke writes that the incident ended happily, with Jesus returning with them to Nazareth, where he “increased in wisdom and in years, and in divine and human favor.”

Much of my work in Thailand as a missioner has been with ethnic refugees from Burma, many of whom fled from villages attacked by marauding bands of soldiers. I have known parents who lost a child in flight from a village in flames, and needless to say such the tragedy is written on their faces years later. Was the child taken and trafficked? Was the child taken to be a soldier, and if so, are they still alive? Was the child merely abused and then shot?

It is the Christmas season, a time of joy, and so I hesitate to speak of an incident in my mission ministry similar in pain and anxiety to that experienced by Joseph and Mary when the child Jesus was left in the temple. I do so in the firm hope that it can help us accept the teaching of Jesus more fully—and that, apparently, was what he was doing in the temple when he got left behind: teaching. And the story does have a happy ending.

In Southeast Asia I worked in a small Buddhist monastery where some of the Burmese refugees took shelter, among them children and war wounded who were cared for by Buddhist monks who fled the fighting in Burma and were refugees themselves.

After several years this led to an invitation by a bishop from Burma to work part-time each year in the intermediate seminary in an area of the country where many of the ethnic people are Christian. These periodic trips into Burma each year offered the opportunity to help both the Buddhist monks with whom I worked in Thailand, and to contribute to some of the diocesan projects.

Across from the seminary where I taught was a parish where I attended Sunday mass. It was always crowded and many parishioners came a considerable distance to attend the service. Due to the collapse of the economy under the military dictatorship and the international boycott, nearly half the nation was unemployed or under employed, a fact well attested to by the fact that the Sunday offering often consist of no more than ears of corn, potatoes, carrots and other vegetables. Now and then after class I would stop over to the rectory for a chat and invariably the pastor would tell me that he had great difficulty in finding the means to feed the increasing number of children at the local orphanage. I always made sure to leave a donation before leaving the diocese. However, on each subsequent visit, as he would tell of even larger numbers of children under his care, I couldn’t help but wonder if the numbers were being exaggerated in the hopes of getting just a bit more help from me. By this time I knew him well enough to ask him outright. “Surely you can’t have that many children being orphaned every few months,” I suggested off-handedly, “I have so many other projects asking for small amounts of funding.”

“Well,” he said, “You are known as a great friend of the Buddhist monks. Tell me, what have you noticed in Yangon and Mandalay when you come into the country? The number of pint-sized novice monks and nuns has only increased—no? Families in Burma still have large families as a number of children don’t survive until adulthood and the rest are jointly responsible for the upkeep of their parents in their old age. Also, the children are needed to help with the farm labor. But with the nearly total collapse of the economy, parents are no longer able to feed all their children and so, as is the custom among Buddhists, a boy or girl will be sent to a monastery as a novice where they will at least get some education and not be hungry—the monks are supported for food through their morning alms round.”

“What do you think they do,” he went on to inquire, “in areas that are largely Christian? They certainly don’t have fewer children. When a family finds they are unable to feed all the children they are faced with a terrible decision. During the week the parents will discuss which of the children they must leave in the pew after the Sunday mass. It is left to the mother to pull the child aside before mass and tell them they are not to get up and leave when the rest of the family does, that the priest will take care of them. I see the child sitting there head down when I go out to see if the altar has been covered and the candles put out, and I ignore them in the hope that during the day the mother will return for the child; but if the child is still there when I go in to lock up in the evening, then I feed the child and we drive out to the orphanage. It’s not easy. But nothing in Burma has been easy for as long, long time.”

I was speechless. “But why wouldn’t the parents just come and ask you to take one of the children instead of abandoning them in such a terrible way in a pew?” I managed to stammer. “Because they know I would absolutely refuse such a request—how am I to find the means to feed so many. I can’t! I simply can’t! You saw the collection basket: potatoes, carrots, ears of corn!” I didn’t wait to give him a donation.

That night, on the banks of the Irrawaddy River, I tossed and turned under the mosquito netting covering my wooden cot, unable to sleep. I kept wondering what it must do to a mother’s heart to be forced to make such a choice, or what must run through a child’s mind for the rest of their life—that terrible question, “Out of my brothers and sisters, how did you choose me? Was I not worthy of as much love, or wanted as much as the others?” No one! No one! -- should be faced with making such choices in life.

It is Christmas time, and such a sad story should not be told, except that it, too, ends on a happier note. Shortly after this incident a group of lay missioners chose to work in this area, and started a project in the orphanage to increase protein in the children’s diet. These missioners also organized villagers in the area to cultivate common gardens to assure more food for children, as well as a weighing program. Villages were donated scales and every child was weighed monthly. If a child failed to gain weight or lost weight, the entire village had to focus on assuring the child got more to eat. The entire community, in a sense, became responsible for the children--not just the parents.

To celebrate the Feast of the Holy Family is to understand that we are co-heirs of the Kingdom and as such we are all one family. No child should to be lost to hunger, to trafficking, to soldiering, to forced labor. No child should be discriminated against because of religion, origin, mental or physical challenges, or due poverty or illness. It is within our power to build that sort of global family.